Latest update on November 8, 2012 at 11:41 AM by Jean-François Pillou.
Computer networks are used to share resources such as files and printers. To share printers on a computer network from workstations running on Microsoft Windows operating systems, the printer can be attached to a computer on the network or the printer may be a printer with a built-in print server. In the first case, the printer attaches to a computer that acts as the print server, and is a less expensive option than the latter. If the printer has an internal print server, it can be directly connected to the network and have a separate IP address. Configuration on the Microsoft Windows computers must be made to access the shared printers. 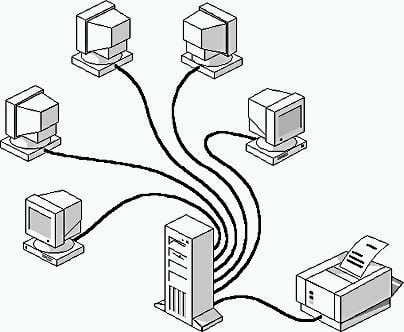 How to share a printer to make it accessible from any workstation with a Microsoft Windows NT/2000/XP:

First, we must quickly understand the connection between the computers and printer. We'll work with the idea that computers PC1, PC2, PC3 are connected to a network via a hub, switch or router and cable rights, unknown Internet machines.

There are two ways of allowing multiple computers to use the same printer. Note that the printers with a print server option are far more expensive than standard printers.

Sharing a computer with printer server


Where IMP1 has a printer connected via USB or LPT on PC1, we would like PC2 and PC3 to be able to use this printer too.
This is the simplest case and for a broader network of little use especially intensive.
After ascertaining that PC1 is able to print a page on IMP1 without any problems, we will activate printer sharing:
Follow My Computer> Control Panel> Printers and Faxes

We should find IMP1, if this is not the case, the printer is improperly installed - PC1 cannot use this printer.
IMP1 right-click> Properties> Sharing tab

Select 'Share this printer'. Give a name to the printer; we prefer to use a name without spaces.
If versions prior to NT IMP1 want to use the printer, they will be installed on the PC1 drivers for these versions (W95/98/NT)
Click OK. It defined PC1 as server printer IMP1

On PC2 and PC3, do the same manipulation:

Were asked to PC2 and PC3 to PC1 to connect the printer to find IMP1, we call PC1 the print server to print from another computer (PC2 or 3), it is imperative that the print server is turned on and in working order (no session has to be open, but Windows must be started). If this solution does not, use a print server:

Sharing printer with a print server


The print server is internal to the printer (or an external box, but this is very expensive now). One can connect the printer IMP2 on a network port RJ45. IMP2 will be recognized as an independent computer on the network and will be connected in the same manner as PC1, 2 or 3 with a RJ45 cable right on the switch.

Using a print server that allows any computer (PC1, 2 or 3) to use the printer without any other machine on means that the function of PC1 is replaced by the server printer. Therefore PC1 is recognized as a full-fledged computer; it will have an IP address and communicate with the same protocols as computers.

Using a print server cannot be explained because it is completely different for each server, but documentation can be found either on the Internet on the manufacturer website, or is often shipped with the print server.

This document, titled « Sharing a Printer », is available under the Creative Commons license. Any copy, reuse, or modification of the content should be sufficiently credited to CCM (ccm.net).
Previous

Customize the save dialog box

Using the su command
Customize the save dialog box