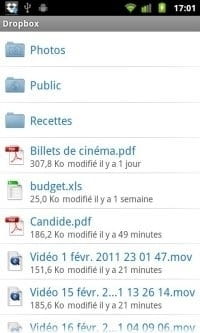 Dropbox recently announced an update of its Android application, which includes video streaming features. This means that subscribers having a terminal running Android Ice Cream Sandwich (4.0) can now stream shared videos without having to download them first.

This application provide remote access from your terminal (smartphone or tablet), to your documents and multimedia content as well as those shared by his friends. The video streaming playback feature is exclusive to the Android application and will rolled out later on iOS.

This document, titled « Dropbox offers video streaming services on its Android application », is available under the Creative Commons license. Any copy, reuse, or modification of the content should be sufficiently credited to CCM (ccm.net).
Previous

Android: Save links, videos or web articles to read them later