Google toolbar is useful and popular ... unfortunately, Google has stopped the development as from the 4th version Firefox, and the latter is recognized as being an incompatible add-on on Firefox 5 or later.
You're disappointed to have lost this valuable tool? No worries, here's a small tip that will help to solve this issue/

Note that: Firefox - You must force the compatibility of add-ons using Compatibility Reporter Add-on . Refer to this FAQ.

As from the 10th version of Firefox


We must first go to the configuration page. To do this, type the following command in the Address bar:

Now you may be confronted to 2 types of situation:

Add-on is already installed but not activated


If the Google Toolbar is already installed on your Firefox but not working, after installing the Compatibility Reporter add-on and restarted Firefox, you simply have to turn it on (Tools> Add-ons)

Note that: Even if the toolbar have the "incompatible" status, it will work normally.


If the toolbar is not installed and you have to download it from this link.


Since Google will not let you download the toolbar from the latest version of Firefox, here's what you can do: 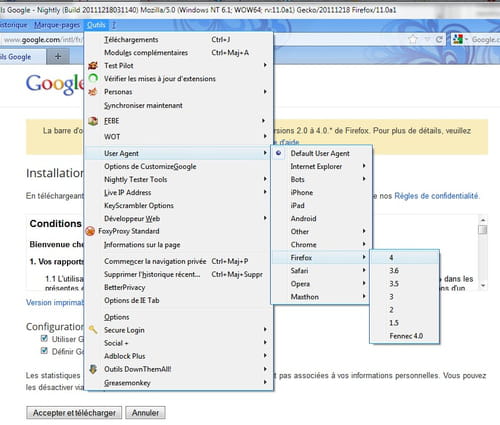 This modification temporary and changes will be reverted once you restart Firefox.

Google Toolbar is not working after updating Firefox


Firefox is changing on a regular basis ... and the above methods may not be enough.
Type the following command in the Address bar:

This document, titled « Install Google Toolbar on the latest version of Firefox », is available under the Creative Commons license. Any copy, reuse, or modification of the content should be sufficiently credited to CCM (ccm.net).
Previous