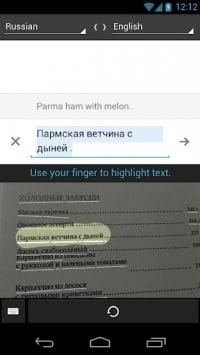 The update of the Google Translate app for Android, released on August 9, offers text translation from photos taken with a smartphone.

The translation, available in 64 languages??, is obtained by highlighting the text captured. The voice chat feature, introduced in 2011, is meanwhile still offered for 17 languages?? and the translation can be made in 40 languages??.

In a poston its blog in April, Google announced that translate.google.com had over 200 million monthly users (more if you count the Chrome users, mobile applications and YouTube users) . Nearly 92% of users are outside of the United States. According to the same post, the tool is mostly used by travelers.

Related
This document, titled « Translate text from pictures taken by your Android smartphone », is available under the Creative Commons license. Any copy, reuse, or modification of the content should be sufficiently credited to CCM (ccm.net).
Previous

Monitor traffic to your website via your Android Smartphone

Monitor traffic to your website via your Android Smartphone
Good Mobile Access: a secure browser for Android devices