The RMI architecture is outlined below: 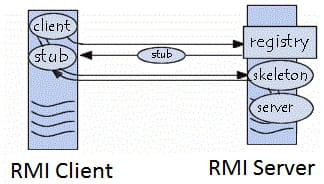 When an instantiated object located on a client, wishes to access the methods of a remote object, it performs the following operations:

To create an application with RMI, proceed as follows:

Related
This document, titled « RMI - The architecture », is available under the Creative Commons license. Any copy, reuse, or modification of the content should be sufficiently credited to CCM (ccm.net).
Previous