VBScript is a language that integrate with container applications, called as "Scripting hosts". Thus the container provides an execution environment and a number of objects with which the language can interact.
Moreover, it is possible to use objects other than the ones natively provided by the container: external objects know as ActiveX objects.
The following diagram summarizes this concept: 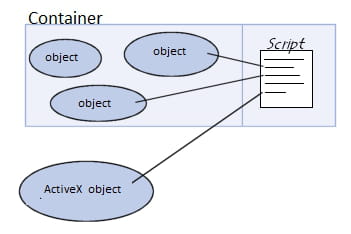 Note that: VBScript programming depends heavily on the container in which it is executed.


VBScript is not case sensitive, which means that you can either write your variable names in lowercase or uppercase. However, to ensure some consistency in your scripts, it is advisable to stick to a specific method. The structure of language allows one statement per line of code. Given that the instructions written in VBScript don't end with any specific character, in order for you to write a long statement on multiple lines, it is necessary to use a special character called a "line-continuation character". In VBScript it is a space followed by an underscore. By cons, to write multiple statements on a single line, it is necessary to use a colon (:) to separate instructions ...

How to add comments?

This document, titled « VBScript - The features », is available under the Creative Commons license. Any copy, reuse, or modification of the content should be sufficiently credited to CCM (ccm.net).
Previous

VBScript - Remove a user from the local administrator group