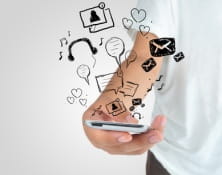 Learn how to make an optimal use of the speech recognition possibilities of Android and iOS.


Since the last update ("Ice Cream Sandwich"), voice recognition on Android has been significantly improved: it is possible to visualize the texts that appear on the screen in real time and this feature has been extended to many compatible applications.

Siri is an intelligent personal assistant launched in 2011 and is compatible with all Apple smartphones as from the iPhone 4S.

It is based on three combined technologies


Here are some examples of possible actions that can be initiated with Siri:

Related
This document, titled « Make an optimal use of the speech recognition features of your smartphone », is available under the Creative Commons license. Any copy, reuse, or modification of the content should be sufficiently credited to CCM (ccm.net).
Previous

HTC One - Reset to default settings

Smartphones for the whole family: selection criteria and models

HTC One - Reset to default settings
Smartphones for the whole family: selection criteria and models