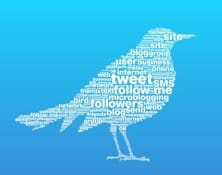 With over 500 million users, Twitter is one of the largest social network. How does Twitter works? Why you should open an account? Learn all you need to know about Twitter:
Twitter is a microblogging platform that integrates all the aspects of a social network. It allows you to send short messages known as tweets. Twitter is a place for public interaction, where everyone is free to share an discuss about various topics. However, it is possible to make your account visible to a small group of people (subscribers), it is called the private mode.
Messages shared on Twitter are limited to 140 characters. A tweet can contain:

To send a tweet, just click on the blue icon at the top right or write directly under "Write a new tweet" field on the left.
To understand the terms used on Twitter:
There are many tools and external applications to optimize the use of Twitter:
Get Twitter for your mobile:
SnapKeys: a four-button keypad (app) to facilitate the writing of your tweets on smartphone and tablets.

This document, titled « Twitter - From A to Z », is available under the Creative Commons license. Any copy, reuse, or modification of the content should be sufficiently credited to CCM (ccm.net).
Previous