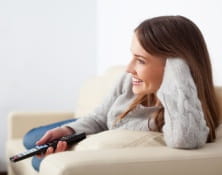 Who has never commented about a TV show on Twitter? Who has never expressed support for a candidate of a reality show or TV program using hashtags? Learn all you need to know about this new trend called Social Television!
The term "social TV" or "social television" refers the interaction between television and social networks .
While watching a program, viewers interact on social networks, especially Twitter. They can ask questions, vote or comment about a particular topic.

(Source:Médiamétrie October 2013).
Twitter is mostly used to interact in real-time with TV programs
Many uses are possible :

Related
This document, titled « Twitter and Social Television: Understanding this new trend », is available under the Creative Commons license. Any copy, reuse, or modification of the content should be sufficiently credited to CCM (ccm.net).
Previous

Crypstagram - Conceal a secret message in a photo and share it!

How to close a Microsoft account?
Crypstagram - Conceal a secret message in a photo and share it!