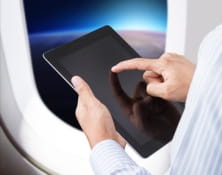 The regulations concerning the use digital devices (laptops, tablets, smartphones ) on airplanes, will be reviewed 2014, the rules will made less strict! When it comes to trains, the rules are not as flexible as it may seems.
Mobile phones emits electromagnetic waves, which may cause interference if the phone transmits signals on the same frequency range as the aircraft's equipment. It should be noted that there's no scientific study that has proven this fact.
Some companies such as Air France -KLM and Emirates offer secure alternatives:
As from 2014, the European Commission authorizes the use of electronic devices in Wi-Fi only mode, when flying over the European area.
One might think that everything is permitted on a train, well that's not the case!
According to Article 74 of the Decree on Railways Policy (French law)
"It is forbidden to use such devices in cars, waiting rooms, platforms or stations accessible to passengers and other users".
The SNCF allows all passengers to have access to a dedicated platforms to make phone calls .
The rules are different for iDTGV:
- IDzap: rail road cars where you can make call, watch a movie via the Digitab,...
- IDzen: quiet cars which intended to be a peaceful and quiet trip (no phones allowed)
Photo: © Warakorn - Fotolia.com

This document, titled « How to use your digital devices when travelling by plane or train? », is available under the Creative Commons license. Any copy, reuse, or modification of the content should be sufficiently credited to CCM (ccm.net).
Previous