Various factors influence your decision when you are scouting out to buy a perfect CPU. There are two major players in the CPU hardware manufacturing segment: one is Intel and the other is AMD. Both provide extensive options of hardware CPU ranges. The AMD CPUs come with a Hypertransport Technology with high bandwidth, low latency and point-to-point hardware interconnection. The pricing of AMD processors is reasonable compared to Intel's. AMD provides faster results despite its lower clock speed. There are different kinds of sockets used for AMD processors. Checkout the compatibility constraints for your PC and Processor. AMD is powerful enough to cater for a 32 bit and 36 bit hardware CPU. Intel processors can perform certain additional tasks that are not featured in AMD. When you buy an Intel processor, ensure the Front Side Bus (FSB) supported by your PC's motherboard hardware matches or is greater than the FSB of processor. There are two kinds of sockets in Intel processors. For office and home use, multi core processors will suffice for gaming purposes. Dual core and triple core processors will be enough. For high-end computing and servers, Intel Quad-Core or a Phenom X4 is useful. 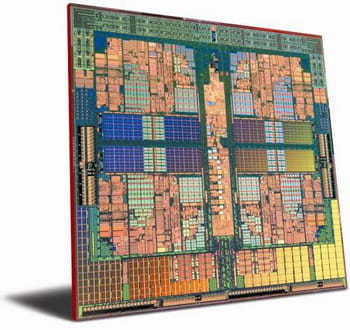 Choosing the right CPU today, is quite a difficult matter, with all these different options available.
This guide will provide you with a simple approach on how to pick the right processor, based on your computing requirements. Should it be an Intel or maybe an AMD? The two main manufacturers provide a large range of products, Athlons, Semprons and Phenoms from AMD or E2 160, E4x00, E8x00 and QX9770 from Intel. Considering that the processor is the most significant factor determining the cost and performance of your PC, choosing the fastest processor within your means may not be the right choice.

Here, below, we shall evaluate the different scopes provided by both manufacturers and try to benchmark them.
Though AMD processors are not as popular as Intel's, the cost and performance factors are quite attractive. With an embedded HyperTransport technology, AMD processors, though they ryn at a lower clock speed than Intel processors, provide faster results.
Invented by AMD, HyperTransport Technology provides a high bandwidth, low latency, point to point interconnection between integrated circuits in your PC, processor to processor, co processors, I/O, peripheral controllers, embedded systems. It also helps in reducing the number of buses in a system and provides an optimized use of system memory for high-end multiprocessing activities.
Among the popular sockets used for AMD processors:
Socket AM2: Athlon 64, X2, FX and Semprons
Socket AM2+: Phenoms Triple-Core and Quad-core Processors
Socket F: Opterons processors (server)
It is very important that you check out if your processor and your PC are compatible. In-depth benchmarking of these compatibility constraints can be found on AMD's official website: http://www.amd.com. Check out the System Building and Compatibility section.
The AMD 64 platform upholds both 32 and 64 bit computing without any degradation in performance. Having an architecture where everything is directly connected to the Central Processing Unit, ensures bottlenecks on the system are significantly reduced.
Athlon 64 series suits desktops and notebooks perfectly.
Opteron processors are mostly used in workstations and servers.
Turion 64 mobile technology for notebooks
For desktop computing, as startup a 64x2 4200 should fit perfectly, a 64x2 6400 should be more than enough for medium gaming purposes. In the case of multi-core processing a Phenom Triple-Core will be a perfect fit for gaming purposes; an overclocking will boost its performance furthermore. Phenom Quad-Core can be used for advanced computing, multitasking applications and graphical purposes.
Intel processors are slightly more expensive than AMDs, but can perform certain tasks that AMD processors can't. Not surprising then why Intel still maintains its lead over AMDs.
The first thing to consider before buying your Intel processor is whether the FSB supported by your motherboard is equal or greater than the FSB of the processor.
The FSB is the bus that allows data exchange between your CPU and the Northbridge (known as the Memory Controller Hub in Intel architectures). The FSB can simultaneously connect several peripherals over the logical and physical set.
Among the popular sockets used for Intel processors:
Socket 775: Core 2 Duo and Pentiums
Socket 771: Xeon processors
For office use an E2160 will be fine. Enhanced performance can be obtained using an overclocked E4X00 processor. Coupled with an 8600GT or a HD3650 graphic card, it will provide enough computing power and reliability for gaming purposes or you can choose an E8X00 for true gaming experience. For high-end computing the QX977 will deliver spontaneous level of multitasking performance, running at 3.2 GHz, with 12MB of L2 cache and a 16ooMHz front side bus: it will satisfy the most demanding needs. Note that cache memory is very important as it is used by the CPU to store instructions that are recurrently used to run applications, thus improving the overall performance.
Office use: word processing, internet browsing, simple databases
Normally basic office use doesn't require a Multi Core processor, but for optimal performance an EX400 or a 64x2 4200 can de considered as reasonably priced equipment.

Gaming purposes:
A Dual core is more than enough for even the most demanding games, but the AMD Phenom Triple-Core can also be considered as a suitable choice. Tips: my personal configuration for gaming purposes: the recently released Intel Skulltrail motherboard, capable of running two Core 2 Duo Extreme QX9775 and up to four ATI graphic card using CrossFireX technology.

Servers:
AMD Opteron or Intel Xeon: which one is better? No matter the one you choose, both provide outstanding computing performances.

Related
This document, titled « Choosing the right CPU », is available under the Creative Commons license. Any copy, reuse, or modification of the content should be sufficiently credited to CCM (ccm.net).
Previous

How to choose the right mouse