Making a video of the Urban Terror game in AVI can be done easily. Press the F12 key to record a video of your video game playing session, and save it in a special file. Pressing the F12 key again will stop the recording. Once the recording is complete, the file will have to be rendered to create an .AVI file. There is a limitation on the size of AVI files: maximum 2GB only. The AVI video is a MJPEG format file which is difficult to compress. However, it is possible to convert the AVI video of your Urban Terror gameplay to other more standard formats. 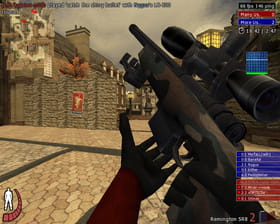 It is easy to make good quality videos of your Urban Terror gameplay in AVI.
When you're in a game, just press the F12 key to start recording (press F12 several times if it does not work the first time).

This saves the game as a special file .dm_68 which takes some space (about 6 MB for each 10 minutes recorded).

You will notice that the recording has begun at the top of the screen (filename and size in kilobytes which increases). Files are stored in:

(Note that recording continues automatically even when you change the map.)
Once the recoding is made in .dm_68, quit the game.
Adjust then the graphics settings of Urban Terror with the resolution you want (800x600 is a good choice), and adjust the level of maximum detail (textures).

This will give you a better picture.

Note that the display is very slow, which is quite normal (each picture is saved to JPEG).

Once finished with the demo, open the console again and type /stopvideo.

The video is created in the directory:


Some console commands can be useful to amend the minutes of the video:


Urban Terror 4.1: limitation on the size of AVI files up to 2 GB.
If your video is larger, it will automatically cut it into 2GB tracks.

Then you can queue up these videos in AVIDemux :"File"> "Add".
There is a small bug in UrbanTerror preventing the replay of a demo. Run the following shell script in ~/.q3a/q3ut4/demos to correct file names:


The AVI file produced by Urban Terror is in the MJPEG format, which is one of the worst nightmare for video compression. (Typically 10 minutes in 800x600 take more than 2 GB).

It is recommended to convert to H264 (with AAC): the video quality will be almost equivalent, but much smaller in size. Moreover, the majority of video sharing sites (YouTube, DailyMotion, etc..) favour the H264/AAC format.

Related
This document, titled « Make a video of your Urban Terror gameplay », is available under the Creative Commons license. Any copy, reuse, or modification of the content should be sufficiently credited to CCM (ccm.net).
Previous

You have been signed out of Playstation®Network.

My 3D game is slow, what to do?
You have been signed out of Playstation®Network.