The Xbox One has the ability to send discrete commands to other devices such as a television, cable box, or audio receiver. You can, for example, set your TV to turn on/off at the same time as your gaming console, which eliminates the need for a separate remote control.

Here's how to take advantage of this feature on the Xbox One.

Turn Your TV ON or OFF with the Xbox One 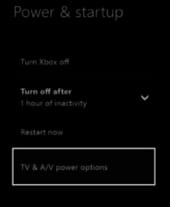 N.B. This feature isn't supported by all devices.

Related
This document, titled « Set Up the Xbox's TV & AV Power Options », is available under the Creative Commons license. Any copy, reuse, or modification of the content should be sufficiently credited to CCM (ccm.net).
Previous

How To Manage Pop-Up Notifications on the PS4