In the course of the past few decades, the computer has become an integral part of our lives, putting a world of knowledge and tools at our fingertips that allow us to perform various operations, advance our knowledge base, progress in our fields, and communicate with one another. Computers are complex systems, but with the ubiquity of this technology, it's easy to overlook the importance of each individual part.

This article will serve as a sort of introductory guide to computers, introducing you to the system's principle components, explaining some basic vocabulary (computer jargon), and hopefully give you a renewed appreciation of the technology at your fingertips. 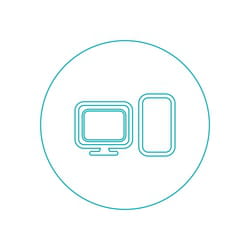 An Introduction to Computers

By definition, a computer is a programmable machine that performs high-speed processing of numbers, text, graphics, and sound. All computers contain a central processing unit (a CPU), memory, and input and output devices that allow operations to be executed and stored by users.

The Main Components of a Computer

The keyboard is used to enter data into a computer. The standard layout of a computer keyboard is known as QWERTY, which is a term generated by taking the first six letters in the keyboard's top row. However, depending on your specialty or area in the world, it's also common to see AZERTY keyboards (most commonly in France), or alphabetic keyboards.

Most computer mouses have two buttons: a left-click button on which we usually place our pointer finger, and a right-click button for which our middle fingers are usually used. Left-clicks are used to perform basic commands, such as opening or closing applications and accessing information. Right-clicks are usually used for more specific commands, such as copying and pasting, or printing a current page.

You're without a doubt already familiar with the term computer screen. A computer screen (commonly referred to as a monitor) is similar to a television: it's the visual component of a computer on which all activity is displayed. There are two categories of screens: a cathode screen (for much older models), and flat screens (generally referred to as LCD).

Here's an example of a cathode screen:

The central unit is the housing unit for most other computer components including the central processing unit (the "brains" of the computer), the motherboard (the main circuits), and the power supply.

All external parts of the computer, including the keyboard, mouse, screen, and speakers are attached to the central unit to create a functional system. 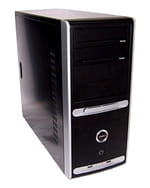 Click: The term "click" or "to click" means to press a button on your mouse. Also used is the term "double click," which means to quickly press the button twice in order to open a file or folder.

Desktop: The desktop is what is displayed on the screen when the computer is started. The desktop usually houses the task bar, or the dashboard and icons on a background image.

Dock: A dock is a sort of "flat" bar located on one of the edges of a screen on which you can find icons, menus, and a list of open windows. Docks are also commonly referred to as a task bar.

Drive: A drive is a device that stores data when it's not in use. Drives can exist in various forms and various sizes, depending on the memory needed to store your data, or the type of files you are storing.

Icon: An icon is a small image (sometimes associated with a few words) that represents an application or an action.

Menu: The "menu" is a button that, when clicked, displays a list of other buttons.

Program/Software: Computer programs and software are platforms on which users may execute different tasks in order to achieve an objective.

Type: The term "type" means to simply press keys on your keyboard.

Window: The term "window" is a rectangular visual that generally corresponds to an application or software. The menu options of a window can usually be found in one of the upper corners of the display. Menu options usually include the possibility to close your current window, minimize it, or control the size of the display.

We couldn't finish an introductory article about computers without addressing the absolute phenomenon that is the internet. The internet is an extremely complex system, but on a very basic level, it can be defined as a network that allows the relay of information between computers.

The principle of the internet (also referred to as the web) is based on using hyperlinks to navigate between documents. Thanks to the internet, we are able to access and browse websites, and to correspond with other users.

To learn more about the complexities of the internet, we encourage you to visit our encyclopedia, as well as our article on how WiFi works.

Related
This document, titled « A Beginner's Guide to Computers », is available under the Creative Commons license. Any copy, reuse, or modification of the content should be sufficiently credited to CCM (ccm.net).
Previous