Latest update on September 7, 2018 at 06:07 AM by Israel Ayala.
UPD and TCP protocols are used to transmit data — or packets of information — across the internet based on IP address, with TCP being the most popular of the two. This article will briefly explain the differences between the UDP and TCP protocols. 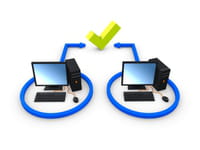 UDP (User Diagram Protocol) is a non-connection oriented protocol. Simply put, when machine A sends packets to machine B, the stream is nondirectional. This means that the data transmission is done without warning the recipient (the machine B), and the recipient receives the data without making an acknowledgment to the transmitter (the machine A).

This is because the data sent by the UDP protocol does not make it possible to transmit the information concerning the transmitter. As a result, the recipient does not know the sender of the data, except for his IP address.

Unlike UDP, TCP (Transmission Control Protocol) is connection oriented. When machine A sends data to machine B, machine B is notified of the arrival of the data and testifies to the good reception of the data by an acknowledgment of receipt.

CRC control of data is based on a mathematical equation and verifies the integrity of the data transmitted. Therefore, if the received data is corrupted, the TCP protocol allows the recipients to notify the sender.

This document, titled « What Is the Difference Between UDP and TCP? », is available under the Creative Commons license. Any copy, reuse, or modification of the content should be sufficiently credited to CCM (ccm.net).
Previous

How To Send Virtual Greeting Cards

How To Send Virtual Greeting Cards
What Is Error 404?