Latest update on June 2, 2020 at 08:38 AM by Dana Elfenbaum .
Facebook, the world's largest social network, has announced the launch of Libra, its own cryptocurrency, with which any user can make payments, buy and even send money. If its planned calendar is fulfilled, Libra will start operating in 2020. With this news, Facebook would become more than a social platform and enters the world of financial services. How will Libra work? What will be its main advantages and disadvantages? 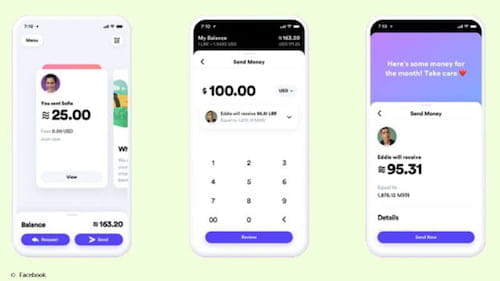 How does Libra work?

Libra is a cryptocurrency based on blockchain technology, a system that guarantees an almost absolute level of security. This virtual currency will allow any type of transaction to be made through the Libra Network platform, where all kinds of stores and establishments can be.

Facebook is responsible for developing the entire infrastructure of Libra, however the management of this currency will be in the hands of Libra Association, an independent institution formed by several companies — among them Paypal, Mastercard, and Visa — and non-governmental organizations from various countries.

To use Libra, users can create their own Calibra Wallet, a virtual wallet that Facebook will make available to anyone who wants to use this cryptocurrency and that will be connected in real time with WhatsApp and Messenger.

According to information from Facebook, one of Libra's main advantages will be its speed when making payments, since it will be faster than Bitcoin and other virtual currencies. In addition, its creators ensure that its use will be safe, easy and convenient, so it could become a reference.

Among the points in favor of Libra is also that its value is expected to be more stable than Bitcoin, the most popular cryptocurrency in the world that, like other electronic currencies, is exposed to constant volatility, with large changes in its value in short periods of time.

In addition, Facebook ensures that Libra will allow purchases or money to be sent at a lower cost — even free in some cases — than that of banks.

Although it is a secure cryptocurrency, its stability will depend on the companies and organizations that make up the Libra Association, whose power and room for maneuver is limited compared to, for example, a central bank.

Another aspect that arouses distrust in the user community is that Facebook could access and use the private information of those who buy or send money using Libra. Mark Zuckerberg's company says it will not share the information of Calibra Wallet users. However, the latest controversies in which the social network has been involved suggest that Facebook has not always told the truth about how it uses the information of its 2.4 billion users.

Another thorny issue regarding Libra is the legal one: since it is a currency that is beyond the control of central banks, some countries could pass laws that limit or prohibit the use of this cyber currency, in the same way That has happened with other electronic currencies. For example, the president of the US Federal Reserve, Jerome Powell, has already been concerned about the possibility of Libra facilitating illegal activities such as buying drugs.

Image: © Facebook.
Related
This document, titled « Libra, Facebook's New Cryptocurrency: Pros and Cons », is available under the Creative Commons license. Any copy, reuse, or modification of the content should be sufficiently credited to CCM (ccm.net).
Previous