I noticed there were a few threads about this where some people weren't able to resolve this issue wherein the computer turns on but doesn't boot up as well as the monitor not getting any signal afte trying to install or uninstall RAM. I came to this forum after having the same issue where in I installed my RAM modules and seemingly nothing I tried worked. I'm not actually asking a question with this message, merely hoping to help those with similar problems...

When a tech person asks you, "Are you sure the memory is properly seated in its housing, or securely in place?" or something to that effect, what people don't realize, and myself included, is that it may looks like it's properly seated, but in fact it's not!
Don't just slide in your memory sticks. Do you see the clamps that hold it in on the top and bottom within the slot? 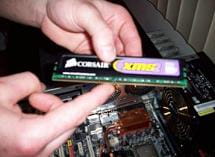 Keep both of those open and afterward place your memory sticks, from there it will be locked within the clamps.
Simply follow the method below

When you have the memory stick lined up within it the memory housings, push down on the top side first. *DO NOT PUSH DOWN THE CLAMPS WITH YOUR HANDS.

Everyone who's had this exact same problem, it's worth a try.

Thanks to TechPac, for this tip on the forum.

Related
This document, titled « No Boot after installing new RAM », is available under the Creative Commons license. Any copy, reuse, or modification of the content should be sufficiently credited to CCM (ccm.net).
Previous

Acer Aspire E380 is on but not booting