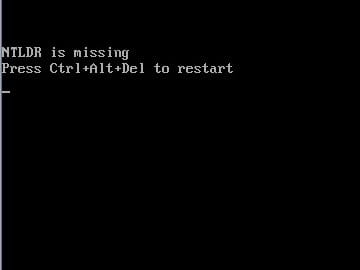 Below are the full error messages that may be seen when the computer is booting.

NTLDR is Missing
Press any key to restart

Computer is booting from a non-bootable source

If you are attempting to boot from a floppy diskette and are receiving this error message it is likely that the diskette does not have all the necessary files and/or is corrupt.

Second, when the computer is booting you should receive the below prompt.

Press any key to boot from the CD

Important: When you see this message press any key such as the Enter key immediately, otherwise it will try booting from the hard drive and likely get the NTLDR error again.

Computer hard disk drive is not properly setup in BIOS

Misconfiguration with the boot.ini file

Edit the boot.ini on the root directory of the hard disk drive and verify that it is pointing to the correct location of your Windows operating system and that the partitions are properly defined. Additional information about the boot.ini can be found on document CH000492.

Attempting to upgrade from a Windows 95, 98, or ME computer that is using FAT32

If you are getting this error message while you are attempting to upgrade to Windows 2000 or Windows XP from Windows 95, Windows 98, or Windows ME running FAT32 please try the below recommendations.

If you are unsure if the new drive is blank or not try booting from a bootable diskette and format the new hard disk drive.

It's possible your computer's hard disk drive may have a corrupt boot sector and/or master boot record. These can be repaired through the Microsoft Windows Recovery console by running the fixboot and fixmbr commands.

Additional information and help in getting into the Microsoft Windows Recovery console can be found on document CH000627.

If you have tried each of the above recommendations that apply to your situation and you continue to experience this issue it is possible you may have a seriously corrupted version of Microsoft Windows. Therefore we would recommend you reinstall Microsoft Windows 2000 and Windows XP.

If you are encountering this issue during your setup you may wish to completely erase your computer hard disk drive and all of its existing data and then install Microsoft Windows 2000 / Windows XP. Additional information about erasing the computer and starting over can be found on document CH000186.

If the issue continues it is also a possibility that the computer has a faulty cable, try replacing the hard disk drive cable with another cable and/or a new cable.

Thanks to xpcman for this tip on the forum.

Related
This document, titled « NTLDR is missing », is available under the Creative Commons license. Any copy, reuse, or modification of the content should be sufficiently credited to CCM (ccm.net).
Previous