In the gaming world there are countless debates about games, consoles and everything in between but one thing unites all gamers and that is the wireless controller or gamepad. It doesn't matter whether you prefer gaming on a PC, PlayStation, Xbox, Nintendo Switch, smartphone or any other platform, playing with a good controller allows you to get the most out of your favourite games. Since its inception, the wireless controller has continued to evolve but what ones are best for playing on PCs, consoles or smartphones? Find out in this list of our top 10 wireless controllers with models for all tastes, levels and budgets. 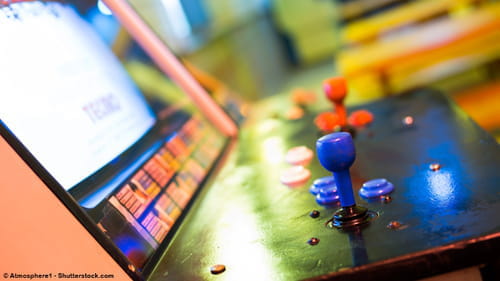 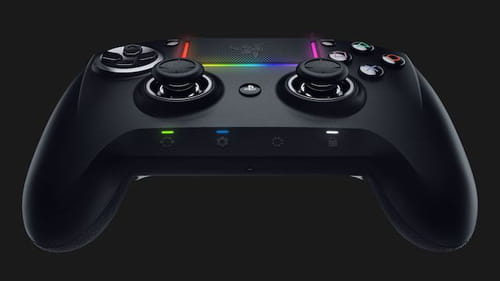 The Razer Raiju Ultimate is one of the most powerful professional level controllers available. It stands out because of its weight and sturdiness, both of which make the gaming experience more intense. In addition to its constitution, it offers five interchangeable buttons, crosses and joysticks that allow you to customise the way you play to standards that other controllers cannot offer. This controller also features additional, fully customisable buttons and rear triggers.

There is a small panel located on the lower front part of the Razer Raiju Ultimate that allows you to modify the RGB light, lock buttons and even synchronise the Bluetooth, to name but a few functions.

This controller is compatible with both PC and Mac (via Bluetooth or USB cable), but also with major consoles (PS4, Xbox, etc.) and smartphones. It comes in at around $200/€200 and is available online on numerous platforms and also on the manufacturers website.

Nanco Revolution Unlimited Pro, The Power of Design and Technology 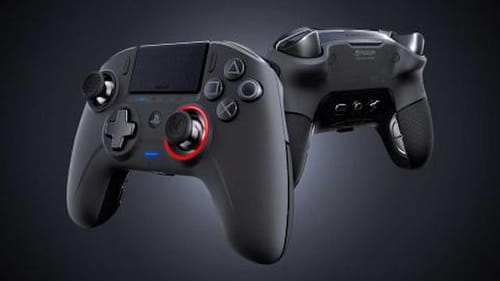 Nanco Revolution Unlimited Pro is a professional level controller and is one of the most beautiful and well designed controllers on the market. Its main strength is the option it includes to have four different configuration profiles, making it quick and easy to change the key settings. This controller also features four hidden buttons on the back of the grip horns, making it possible to adjust to three different weights, at the players discretion.

The ideal console for playing with the Nanco Revolution Unlimited Pro controller is the PS4, even though its key layout is reminiscent of Microsoft controllers. Unfortunately the Nanco isn’t compatible with Xbox but does allow for gameplay on smartphones thanks to its Bluetooth connection system. It is available on Amazon for around $160/€140. 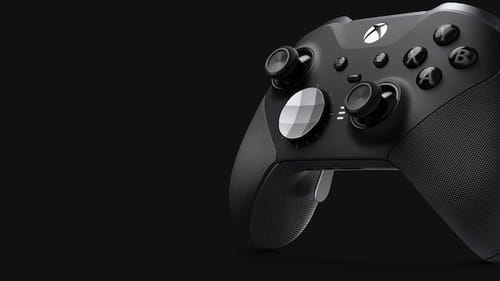 This modern piece of engineering in the form of a controller offers a unique gaming experience for lovers of the traditional Xbox controller. Among its many features, the new centre crosshead is noteworthy as it has been transformed into a textured panel which improves diagonal movements among others. It also features 4 toggle buttons on the back, allowing you to adjust special options in countless games.

The Xbox Elite Controller has enhanced and customisable triggers, the option to add additional buttons and incorporates a tab to make switching between up to two configuration profiles quick and easy.

The controller is priced at around 200 dollars (180 euros) and it is possible to purchase it through the Microsoft website. In terms of compatibility, the Xbox Elite Controller works through Xbox Wireless, Bluetooth or USB-C cable, so you can play games on PCs, Xbox and any next-generation mobile phone.

Xbox One Controller, The Reasonable Choice 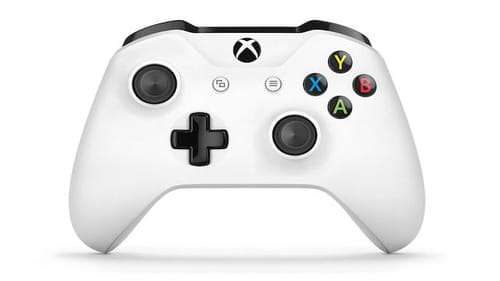 The Xbox One Controller is available in black and white at the modest price of 60 dollars (around 55 euros) at the Microsoft store, where you can also buy a small accessory that allows you to play with a wireless connection outside the bluetooth connection, at a speed of 2.4GHz. 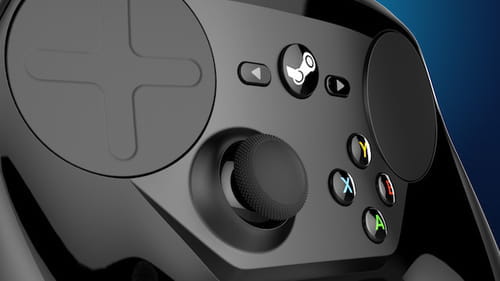 The Steam Controller is Valve's official controller, which makes it the ideal device to use for playing Steam games on your PC. The strength of this controller lies in its versatility in customisation of controls and keys as well as its ergonomic design, making it ideal for extended gaming sessions.

Another striking feature of the Steam Controller is its unique analogue stick. It also features two round panels that allow the second joystick or crosshead to be covered if necessary.

Nintendo Switch Pro, a Controller With no Limits 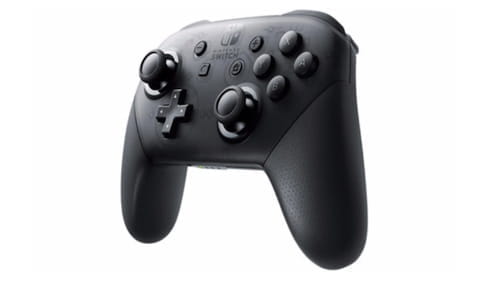 Nintendo's Joy-Con revolutionised the controller catalogue just a few years ago. The Japanese manufacturer is now back with the Nintendo Switch Pro, a versatile and agile controller that is equally compatible with PC or Mac (via USB-C cable or Bluetooth) and any Android smartphone (via Bluetooth).

Price wise it comes in at around 75 dollars/70 euros and it is available on all online platforms including Amazon.

8Bitdo Sn30 Pro, For The Nostalgic 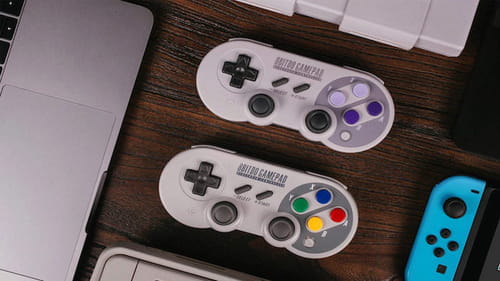 Nostalgic gamers and collectors will love the 8Bitdo Sn30 Pro that has the look and feel of old school controllers but will allow them to play the latest games on the market. This controller mimics the design of the SNES and includes a D-Pad cross and four buttons, plus rear triggers and two analogue joysticks.

The 8Bitdo Sn30 is available with a 2.4GHz connection and bluetooth system which is optimal for use with Windows, Mac, Raspberry Pi, Android and Nintendo Switch devices. Currently it is only available in the US through Amazon or Bestbuy and is priced at around 45 dollars/40 euros.

DualShock4, Tradition and Innovation in One 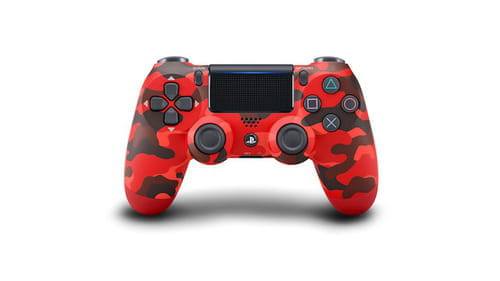 Neither new nor particularly unique in terms of features, Sony's DualShock 4 has however become a symbol both for its design and for being one of the most complete controllers on the market (despite its age).

Many users aren't aware, but this controller incorporates one of the best accelerometers and gyroscopes of its category, resulting in its great sensitivity. Thanks to its bluetooth pairing system, the DualShock 4 is suitable for PlayStation as well as for PC and mobile phones. This controller is priced around 67 dollars/60 euros, is available in a wide range of colours and on all large platforms and shops. 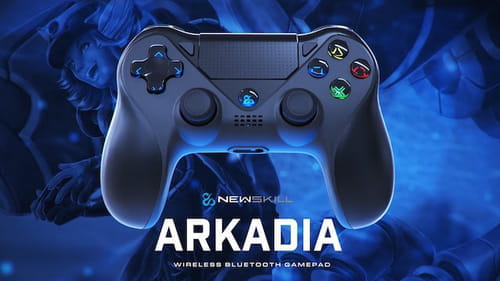 The Newskill Arkadia has similar features to the DualShock4 but comes in at a lower price point-around 56 dollars/50 euros. The biggest advantage of this controller is its connectivity, since it works perfectly with PS4, smartphones, Nintendo Switch (through its bluetooth 2.1 technology) and even PC, both wired and wireless.

Newskill Arkadia can be purchased directly from the manufacturer's official website. 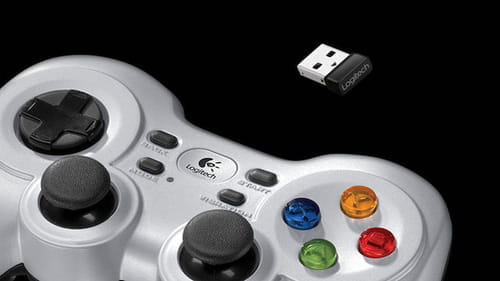 Logitech is a brand that does a great job managing both quality and price. The Logitech F710 controller is the perfect example of this featuring keys with a classic layout and analog stick, as well as its own software to configure the key layout, with the ability to then easily add mouse and keyboard.

Although smaller than others in its class, this controller doesn't have a rechargeable battery system, but instead uses standard batteries, which allows you to quickly change the power source without waiting for the charging process to complete.

The Logitech F710 is the cheapest controller on our list coming in at just 38 dollars/34 euros and is available at all major retailers and also on all major platforms (Amazon, etc.).

Related
This document, titled « The Best Wireless Controllers For Gaming on PCs, Consoles and Smartphones. », is available under the Creative Commons license. Any copy, reuse, or modification of the content should be sufficiently credited to CCM (ccm.net).
Previous

The Best Apps to Play in a Group with Friends and Family
New Game Releases for Xbox, PlayStation, Switch and PC