Issue: The brightness of laptops screens.

The screen of my laptop has lose some brightness. How to restore default brightness?

Reasons for the problem


Improper handling.
On laptops, following the power scheme chosen, it is possible that after a disconnection of the power cord, the screen's brightness may fade out.


Seven or Windows Vista, the solution is very simple. Just simultaneously press Windows key + X. You will have the following window: 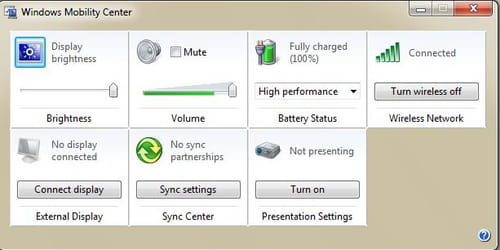 Then drag the indicator to change the brightness to your liking.


On most laptops, there are already shortcuts to change the brightness. For example:


You can easily find these shortcuts just by looking on the keyboard. Brightness is often designated by a small sun with an arrow at the top or bottom. But sometimes we need that the proper driver is installed for these buttons work!

This document, titled « Windows Vista & 7 - Changing the brightness », is available under the Creative Commons license. Any copy, reuse, or modification of the content should be sufficiently credited to CCM (ccm.net).
Previous