For believers in open source software development, Linux is often the operating system of choice. Linux has some great advantages like running on small configurations or is, in other words, less resource intensive. It can work on old computers where even Windows XP would be considered resource intensive. Other advantages include the flexibility to choose a desktop manager and the ability to pick up the required distribution which requires small configurations. Some of the distributions have built-in desktop managers like Feather Linux, Fluxbox and IceWM. All these flexible options make Linux a great operating system to work with.

What OS for my old PC?

Want to recycle your "old" i486?
Which operating system to install?
Windows XP and Vista: are too resource intensive
Windows 95/98/ME: not recommended since these versions are no longer maintained and safety risks are too great
GNU/Linux: excellent choice because you can choose not only the distribution but also the desktop manager.

Here are some screenshots:

Damn Small Linux running on a machine with 64 MB of RAM...and there is still room in the memory despite Firefox being launched: 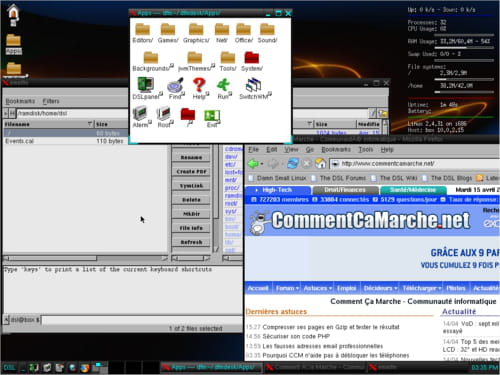 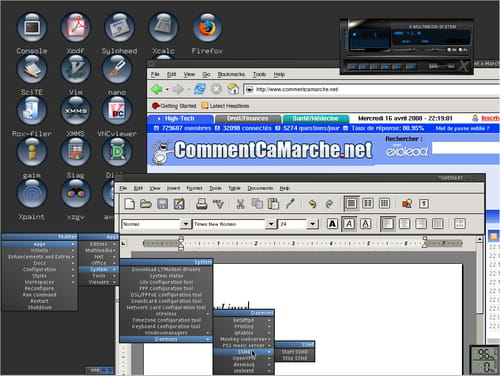 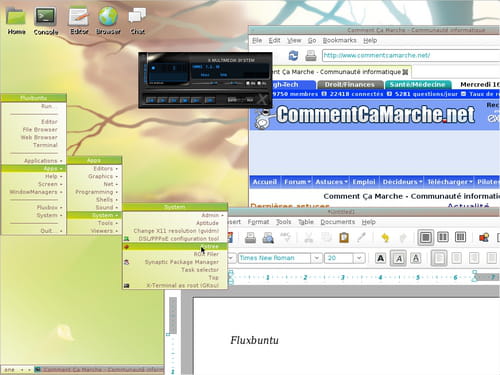 On Windows, this is not possible, but GNU/Linux allows you to choose a desktop manager that is not too resource intensive. This is because, the GNU/Linux distributions all share the same basis, the actual difference in terms of resource consumption is the choice of desktop manager.

Desktop stands for the working interface of any user. This man-machine interface (HMI) uses a window manager, and sometimes an integrated graphical environment.

But note that desktop solutions in 3D (three dimensional) are unusable on i486 with 512 MB (at best) of memory (RAM).

If you want a "simple" window manager, turn to:

If you want a 2D graphics environments (more complete), turn to:

No need to install the latest Mandriva (for example). If, with any luck, you manage to install it, then chances are that you will not be able to graphically start it, because of a lack of resources compared to the desktop installed. Moreover, Mandriva is compiled for i586 and x86_64 processors. So better install another desktop, that is "ready to use" based upon your configuration.

Ready to use distributions

Note that some distributions may have several desktop managers available:
Feather Linux: Fluxbox and IceWM,
VectorLinux 5.1: Fluxbox, IceWM and Xfce.

The given list considers only those having a desktop manager available by default, but it is always possible to install another thereafter.

No distribution with default Blackbox found.

No distribution with the default FVWM found.

Requires a Pentium 166MMX, 128 MB of RAM (but only 64 MB of RAM if there is already a Linux swap partition)

You installed a distribution with an office that does not allow a real graphical boot? If you can log in console mode and you're connected to the internet, then:

Debian adapts easily to an i386 and can be installed directly from:

Related
This document, titled « Running Linux on small configurations », is available under the Creative Commons license. Any copy, reuse, or modification of the content should be sufficiently credited to CCM (ccm.net).
Previous