An important feature when using Ingres is the node (vnode). This is where the Ingres/Net module is active.

The vnode allows you to settle the parameters for Ingres to connect to Ingres installation. This concept supports the implementation of a client/server environment. The client is often represented by PC with a Windows GUI and the server is a machine on which the database is installed and data are stored.


In the case that there are several triplets address/protocol /listen address, Ingres will connect to the first, then the second in the event of failure, and so on. This is how high availability is implemented (either because there are several Ingres/Net connectors started on the server or in the case where data are replicated on different machines in real time by Ingres/Replicator.

A node can be global or local, where global supports the fact that the configuration of Ingres/Net is common to all users of a machine and where local concerns only the user who has been updated.


The update tool is called netutil, you will find it in the following screen independent from the platform used (Windows, Linux, Unix or VMS). 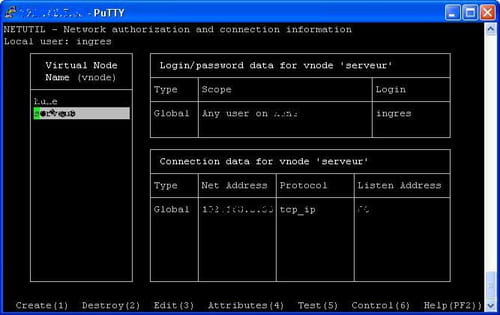 Once the node created proceed to some testing. If the test fails, it is usually due to one of the following:


A password installation is a concept endemic to Ingres. In layman's term the DBA on the target machine will allows or not other DBA to connect to its installation (to be more precise it is a node that has specific properties).


when the node will be called by user from the client which will be use to connect to Ingres. It must be stated in Ingres (see the accessdb) and but doesn't need not exist on the target OS.

Making use of the node.

Related
This document, titled « Getting connected to Ingres: the node », is available under the Creative Commons license. Any copy, reuse, or modification of the content should be sufficiently credited to CCM (ccm.net).
Previous

The main process of Ingres (Unix and Windows)