What is a portable software?

Sometimes you may need to use your favorite applications while you are on the road and the main issue is that it they are not always available and in some situations, you don't have the necesserary permissions to install them on a PC, which justifies the use of portable applications!

Ideally, a portable software/application is:

If the first 4 points are normally considered as what define a portable application, the last point is often overlooked.

You can use a portable software on any computer that meets the prerequisites of the software. Often your personal data may be stored on the same storage media containing the portable application (on which these data were worked upon). Thus, making portable application MBre discreet and allowing you to use it without leaving traces on the host computer.

Portable application should not be confused with the concept of portability (cross-platform applications), meaning that these applications may be installed on various operating systems.

Small ang simple applications are considered portable because they naturally do not require any prior installation. One example is Putty. Others require MBre or less significant changes to adapt to this type of operation.

added possibility of other programs

PortableApps-set of Open Source applications.
(But not necessarily free)

That's the basic, then it is up to you to choose the programs you need from the site. 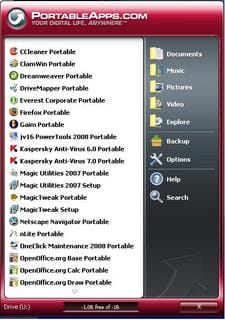 Menu format similar to the one under of Windows
Note that several software require activation keys! (Shareware software!)

Three versions are available, the most complete version offers more than 200 applications.

LiberKey Basic (OpenOffice is not available in Basic version!)

There are many other software. Example from the standard version:

Related
This document, titled « Portable applications », is available under the Creative Commons license. Any copy, reuse, or modification of the content should be sufficiently credited to CCM (ccm.net).
Previous

How to read .CBR files?

How to read .CBR files?
The Best Management Softwares