Changes to terms of service were necessary to keep in step with how people share pictures, comments and other information in the popular online community, according to Facebook founder Mark Zuckerberg.

"We wouldn't share your information in a way you wouldn't want," Zuckerberg said in an online posting addressing concerns.

"The trust you place in us as a safe place to share information is the most important part of what makes Facebook work."

"It is common language in every website because their cut-throat lawyer says you need to cover yourself," said Future of Privacy Forum director Jules Polonetsky.

"This doesn't mean that Facebook can make a mini-series on your life or write a book about you, but they might be able to create a feed that lets your friends on Twitter know what you're doing. Folks should just calm down."

Meanwhile, Facebook remains bound by its vow to honor privacy settings members use to dictate which of their online postings can been seen by whom. 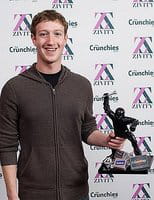 Terms of service acknowledge that once pictures or messages are sent to friends at Facebook, senders surrender control of the data.

Internet users want full ownership and control of their online information while simultaneously being able to collect email addresses, phone numbers, pictures and other data from others, Zuckerberg notes.

"These two positions are at odds with each other," Zuckerberg wrote.

"We are not claiming and have never claimed ownership of material that users upload," Facebook said in an email response to an AFP inquiry.