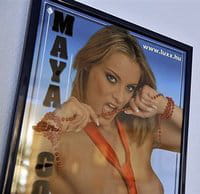 In its first general survey on pornography, the IFOP polling institute found that 89 percent of the 1,016 people interviewed had seen an adults-only film in its entirety or in part -- 97 percent men, 83 percent women.

What they liked best, aficionados said, was to see physically attractive actors and actresses, and good plots.

Free Internet sites provided access to 45 percent of those polled, followed by cable TV and DVDs.

Some attitudes seemed little changed, however.