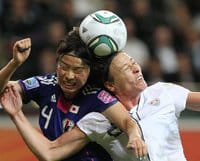 USA's striker Abby Wambach (R) and Japan's defender Saki Kumagai vie for the ball during the Norio Sasaki, who piloted Japan to victory at the women's World Cup, apologised Friday after unsavoury alleged party conversations involving one of his players, defender Saki Kumagai, were exposed through Twitter.

Norio Sasaki, who piloted Japan to victory at the women's World Cup, apologised Friday after unsavoury alleged party conversations involving one of his players were exposed through Twitter.

Japan, nicknamed Nadeshiko after a pink flower seen in the country as a symbol of feminine beauty and grace, beat two-time champions the United States 3-1 on penalties after a 2-2 draw in the final in Frankfurt last weekend.

But defender Saki Kumagai, 20, who struck the winning penalty, was tracked on the micro-blogging site on Wednesday night when she attended a party with friends and university students.

One of the students, a 21-year-old man, used Twitter to quote Kumagai as criticising coach Sasaki and a rigid "hierarchy" in the team, and to display a picture showing the player and himself.

The tweeter also said Kumagai had shown him a picture on her mobile phone of one of her teammates, naked from the waist up.

Kumagai denied the allegations on Twitter late Thursday, apologising for "causing trouble to the coach, the teammates, the people concerned and every one who is supporting us." 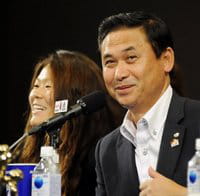 "It is not true that I criticised the coach. But, undoubtedly, I was so inarticulate that my words were misunderstood," said the Urawa Reds Ladies defender, who is now bound for the women's Bundesliga side Frankfurt.

"About the team situation, it was written in expressions which were far from the facts," Kumagai said.

"I want to raise my awareness not only in the area of football but also in every aspect."

Apologising on Friday, Sasaki told a news conference: "It is all due to my lack of supervision. I should have been more thorough in guiding my players."

"We have failed to adapt to changes in public attention on the Nadeshiko," Sasaki said. "Allow me to apologise to all the people who have supported the Nadeshiko."

The team, ranked fourth in the world, on Sunday became the first Asian side to lift the World Cup and boosted a nation still recovering from the March 11 quake-tsunami disaster, which also sparked a nuclear plant crisis.

Japan Football Association vice president Kuniya Daini told Kyodo news agency: "I gave instructions to tell everyone not to get carried away and watch out for their own behaviour."