Among Us free for PC, Mac, iOS, Android APK

Among Us is a party game that offers a crazy and thrilling experience where players will have to discover who are the impostors to survive. Multiplayer and online, you will love to share breathtaking moments with people and your friends.

The main objective is to find the impostor among the crew of the spaceship before it takes off for its next mission. On the other hand, the impostor will do whatever it takes to eliminate the other crew members and sabotage the spaceship. But stay alert and decide quickly as his identity has to be revealed before he can bring his Machiavellian plans to fruition. 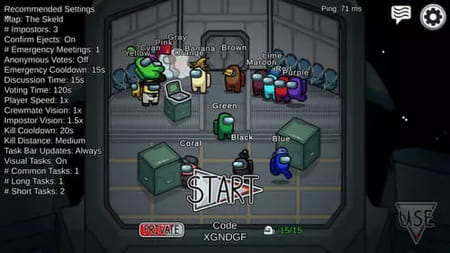 Although it is a game with fairly simple 2D graphics, its gameplay is highly addictive. Once you start playing, you won't be able to stop!

Among Us is an online multiplayer game with cross-play possibilities between PC and mobile devices. It has recently incorporated a brand new game mode called Hide and Seek, in which the identity of the impostor is revealed at the beginning of each round and the other players have 5 seconds to find the perfect hiding spot. Among Us games can host between 4 and 15 players and each round has an average duration of 15 minutes.

“Such a simple, and yet such an amazing game. Among Us puts the crew of astronauts against an Impostor who looks the same as other players, but is on a task to sabotage and murder everyone. Gameplay works perfectly and can easily break a few friendships”. (PLAY! Zine)

Among Us has been labeled PEGI 7. It does not feature scenes of explicit violence, but being an online multiplayer video game, users can encounter strangers playing the game.

How to install and play Among Us on your PC for free?

The official Windows port of Among Us is not playable for free, but the Android version is. Using our download, you can emulate the Android version on your PC and thus avoid having to purchase the game. We provide you with both the Among Us APK file and the BlueStacks emulator that will allow you to run the application on your PC. You just need to unzip the file and follow the steps described in the Installation instructions document.

CONTENTS Plot Gameplay Graphics Duration and game modes Reviews Age rating Installation and play on PC Plot The main objective is to find the impostor among the crew of the spaceship before it takes off for its next...