Previous Topic Next Topic
Hello everyone,
I'm currently studying computer engineering and about to finish my first semester, anyway, my teacher for C is terrible and has no idea how to explain programming at all and suddenly gives us this impossible assignment that I have no idea how to write since we barely saw arrays and functions, if somebody would be so kind and help me with this code I'd love you for the eternity. Here's the assignment (I attached the final program as an image)

For your second assignment this semester, you are required to write
a program for a logic game called "Weaver's Island".
The object of the game is transport "cargo" (Monkeys, Coconuts, and
Alligators) from a land port to an island.
In order to "transport" the cargo, you will need a "ship" (a character array)
that allows you to "transport" only 1 item at a time. 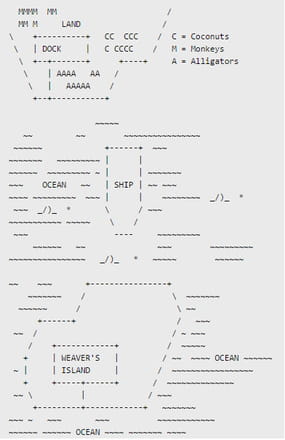 However, the game has the following rules:
1. Only 1 type of cargo can be transported at a time.

3. The Monkeys cannot be left alone with the Coconuts, because
the Monkeys will eat the Coconuts.
In order to complete this assignment, you will be required
to complete the code for the following functions that make use of
characters strings.
Recall:
A string is a character array that is terminated with the null byte '\0'.
Also, you may make use of any of the <string.h> library
functions you wish (for example, strlen( )).

void loadCargo(char ship[ ], char land[ ], char type);
This function copies all of the characters that match the character
'type' from the 'land' string into the 'ship' array.
Once all of the characters have been copied into the ship array,
you must terminate the array with the null byte in order to make
it a proper string.
Also, after each character is copied from the 'land' string it MUST
be changed to lowercase (i.e. 'C' to 'c', 'M' to 'm', etc).
An uppercase character can be changed to lowercase by adding 32
to the uppercase character.

NOTE: If copying characters from the ship to the island, don't forget
to add the null byte at the end into the destination array.