Tweetbot 6 is an early-access version and will probably get more and more optimizations in the future.

Tweetbot 6 is a third-party Twitter client app designed for Apple devices. The app was developed by Tapbots. Tweetbot version 6 was released in January 2021 and is an early-access version of the app. In this article, we discuss some of the app’s key features, as well as some additional information. 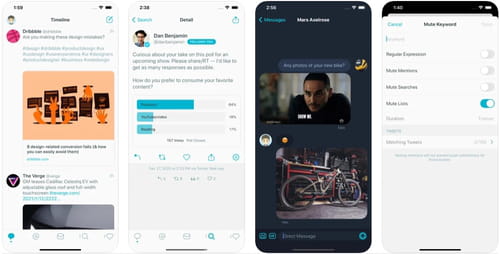 How Does Tweetbot 6 Work?

As mentioned above, Tweetbot has an intuitive interface. Once you install it, you will have to connect with your Twitter account. Next, you will be able to browse by tweets, followers, following and listed. On the left side of the screen, you will see the settings bar with different options, such as your profile, messages, likes, search button, status button, and more. To make the most of the Tweetbot app, we recommend checking the official tips.

It seems that the app has no history of security issues or abusive data collecting. As always, we recommend reading the official Privacy policy in order to take note of the way Tweetbot 6 uses your data. In general, the app seems as safe as any other photo and video editing software.

You can download and use this app for free. However, it contains some optional in-app purchases that vary between $0.99 and $5.99.

This an early-access version of the app and in order to run it on your device, you need iOS/iPadOS 14.0 and later. Tweetbot 6 is compatible with iPhone, iPad, and iPod Touch. There is also a version for Mac that requires macOS 10.13 and later.
Images: Apple store