Antiryad Gx
Download
Download Freeware (117.72 MB)
Windows XP Windows Vista Windows 2000 Windows 7 Windows 8 - English
Antiryad Gx is a software designed to develop an environment for 2D and 3D video games. It contains all the necessary tools for the realization of such kind of project. 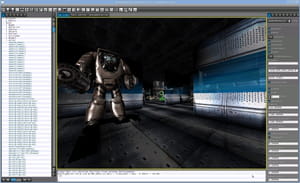 Creation: a range of drawing tools has been integrated into Antiryad Gx to generate the video game elements. The user can create universe and characters in 2D and 3D according to his need.

Edition: it offers various items to perform the task such as a text editor, water and shadow effect and many others. The software supports different informatics languages such as C, C++ and Visual Basic languages.

Compilation: this program offers the ability to compile executables games on different platforms. For instance, we can count a few such as Nitendo, PSP, as well as XBOX. It can also translate the programming language in a coding understood by the computer

Antiryad Gx has its own project manager in its resources.
The user can add visual effects to images and animations created.
Many bugs have been fixed since this recent version.

It is only a trial version.
The license version can be bought on the editor's website.
Share