Loaded with a classy interface, this is an engaging app for iOS users.

My Talking Pet is an iOS application that lets users animate pets. The user has to take a picture of the pet, record voice (utter few sentences) and let the pet speak these words with the animated images. The editor of the application, WOBA Media integrated with it several appealing features like the ability to share the output on sharing websites. Selecting the image of the pet is done via file browsing on the image library. The user can also directly take a picture from the device's camera and enter it directly to My Talking Pet. Once introduced in the app, the user will have to record a voice composed of few sentences.

My Talking Pet manages to animate the image's eyes, mouth, and chin by editing and encoding the latter. After that, it can combine and match the recorded voice with the pet's animated image. Note that the speaking voice is customizable. The user can select the tone of voice of a big dog or the voice of a little cat or any voice between. Once created, it is possible to play an animated pet directly from the mobile phone. My Talking Pet lets users save the output to the Camera roll that can be watched at any time or shares it on the Facebook social network. If not, the talking pet animation can be sent to other friends via email. 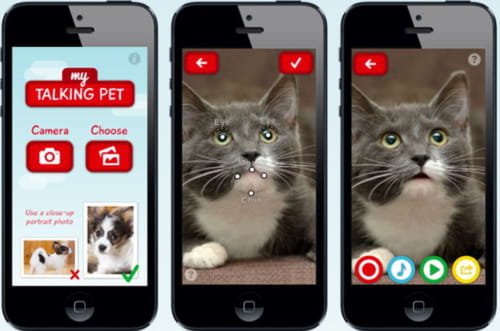 This application is free for a limited time only.
Share

Latest update on September 25, 2019 at 04:09 AM.
Paid for the yearly subscription, but can't get it to allow more than 5 shares.
Only allows 5 free shares
Loaded with a classy interface, this is an engaging app for iOS users.
This is awesome and so easy to use!!!
Fun
View all 6 comments