Disney+ is the dedicated on-demand streaming service created by The Walt Disney Company. Subscribers to the service can enjoy thousands of movies and series from Disney, Marvel, Pixar, Star Wars, National Geographic, and more.

Disney+ is Disney's very own video-on-demand platform. Launched at the end of 2019, Disney+ has become a serious rival to other streaming giants such as Netflix, HBO Max, and Amazon Prime Video. The service gives you access to a huge catalog of series and movies from Disney, Pixar, Marvel and Lucasfilm (Star Wars), as well as hundreds of high-quality National Geographic documentaries.

What are the key features of Disney+? 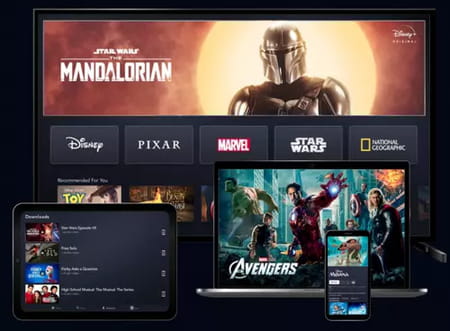 Please note: The content available on Disney+ may vary by region, meaning that some titles may not be accessible in certain countries.

A Disney+ subscription sets you back $7.99 monthly or $79.99 when billed annually, which is almost 20% more economical than the monthly rate. There is also a bundle with Hulu and ESPN+ for $13.99 per month.

On top of the regular subscription, there is also a feature called Premier Access, a way to unlock films that have not yet been released to the public. Premier Access costs $29.99 per title.

check out our tips and tricks for disney+
Disney+

CONTENTS About Key features Cost What is Disney+? Disney+ is Disney's very own video-on-demand platform. Launched at the end of 2019, Disney+ has become a serious rival to other streaming giants such as Netflix, HBO Max, and...