Zuma's Revenge is a tile-matching puzzle video game developed and published by PopCap Games. It is a sequel to the original Zuma and still stands as a very successful game.

As a brave and vigilant frog, you once again have to return to a cursed island where the gods and evil spirits have revived the puzzle-action of Zuma in unique ways. This time the puzzle to solve will really challenge your skills, and your enemies will be more dangerous. Take them down and end this madness once and for all. 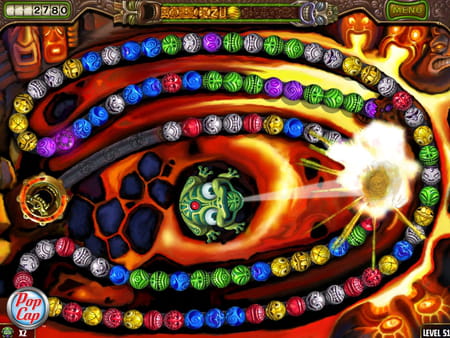 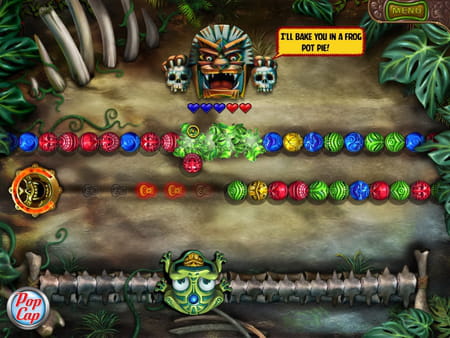 Zuma's Revenge features high-definition graphics in a world full of shape, color, and visual feedback. Besides, the user interface is both well designed and easy to understand, and you will enjoy the OST composed of themes with two versions that dynamically change depending on the in-game context (a lighter theme without danger and a more frenetic one when in danger).

The game offers a solo adventure, but you can compete with your friends for the highest score on the leaderboards. You can complete the main part of the game in about 6 hours, but if you want to discover all its aspects, you are likely to spend over 20 hours. Several game modes are available:

Zuma's Revenge is a very famous game rated 78/100 on Metacritic.

"While a multiplayer mode is sorely missed, with Zuma's Revenge PopCap has given gamers exactly what they wanted, a new title that's even better than the original." (GamePro)

Zuma's Revenge has been rated PEGI 7 as some background may be frightening for a young audience.

Contents Plot Gameplay Graphics and sound Duration and game modes Reviews Age rating Plot As a brave and vigilant frog, you once again have to return to a cursed island where the gods and evil spirits have revived the...