I have my normally strange question for you to solve (even this begs a new question "Can something be both normal and strange at the same time??")

For those of you who want the short version I need to know where I can download a copy of the MBR for a HP Pavilion G6 running Windows 8 or find out how to boot into the recovery partition which I believe to be intact. The [f11] key does not work. I need to "Break into" it.

Now the story for the rest of you :^)

Before I start I would like to state that I would usually be able to do this ... if my son hadnt tried to fix it already ...

The history. My sons Windows 8 PC decided it wanted to update. It stuck during the update, so after about half a day he powered it off. He switched it on to be welcomed by a black screen. He then decided to restore it to factory settings using the Recovery Partition using the [f11] key (for reasons best known to himself he has not created the recovery DVDs. This sort of worked but his 750GB drive was now only 90GB. Also Windows was not fully installed - there was no Internet Explorer and many of the bloatware apps that always come with a new computer was not there. Some other functionality was abscent - like the ability to install drivers. He retried to install from the recovery partition again, but it wouldnt work. He then deleted the Windows partition and tried again. And then called he called me when it didnt work. I tested the Hard Drive which tested as good with Cristal Disk. Memtest 84 showed no RAM issues. I have coppied the drive partitions to a fresh (but smaller) drive so as to preserve whatever is left on the original drive, so there is no valid MBR in the new drive. On the new drive I have managed to extract the .wim file with imagex to the hard drive C:\ which is active. I can see all the Windows files you would expect in the C:\ drive, but the lack of the MBR means that the [f11] button no longer works, and the machine says there is no MBR so wont boot. I have tried doing an MBR fix using a Windows 7 disk (I dont have a Windows 8 disk), but this also resulted in failure. I have a "bypass the MBR" cd for use with XP, but with this I get errors that hal.dll is missing. I guess the cd points to a different boot part.

So back to the question ...

I need to know where I can download a copy of the MBR for a HP Pavilion G6 running Windows 8 or find out how to boot into the recovery partition which I believe to be intact. Remember, the [f11] key does not work. I need to "Break into" it.

Any advice would be greatly appreciated.

I really appreciate thank you messages as a payment for solving issues :o)
Related:
Answer 1 / 4
this is a bit tricky
you need a pro partitioning program and a way to build the master boot records I think you should communicate with HP support for that.
try contacting with them.
or try this
follow the instructions to make your own recovery partition
in the link below
http://www.rmprepusb.com/tutorials/auto_restore

please inform me if it works for you, if not I will keep on working on it with you.

Sorry Max, but all of these involve having a working copy of Windows. Whilst I have all the files that Windows 8 uses, I cannot boot it due to the lack of a MBR.

I am not scared by the thought of building my own MBR and using that to boot th machine, but just dont know how to go about it. I do have the MBR export and import software as well as software to manipulate one. as mentioned in the description, I do have a Bypass MBR cd, but I think its pointing to the wrong spot.

I am abouot to go down the route of installing Windows 7 so as to create a MBR, and then deleting the files created and replacing them with the Windows 8 files. I'll report back how I get on with this later, but im not hopeful because of the different OS.

Thanks again for your efforts.
Answer 2 / 4
in order to boot your system to backup your windows product key and save your other files follow this

1. Boot your computer to the Windows 7 DVD (or to a "Repair CD"). At this screen choose to install now. 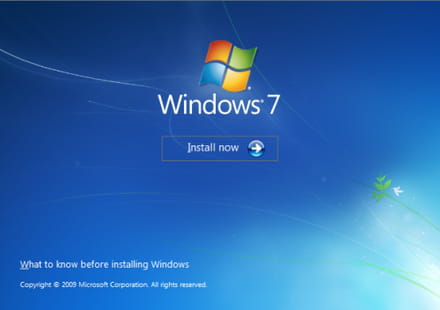 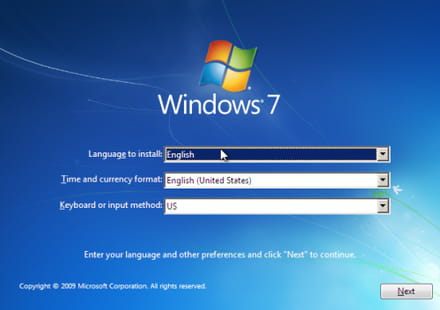 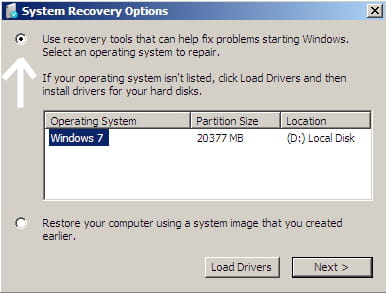 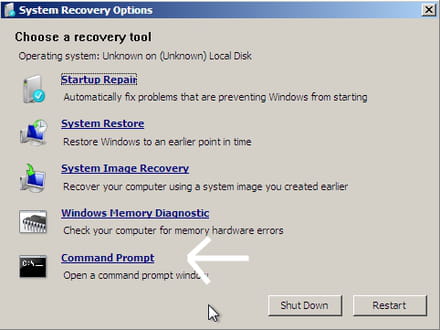 5. When open, the command prompt will look like this:

6. The command we will use, bootsect.exe, is in a folder (named boot) on the DVD.
We need to know what drive letter has been assigned the DVD drive to access the folder.

In this screen shot, the 7 DVD is letter: G

7. Use your DVD drive letter and

to verify that bootcect.exe is there (if you really need to) 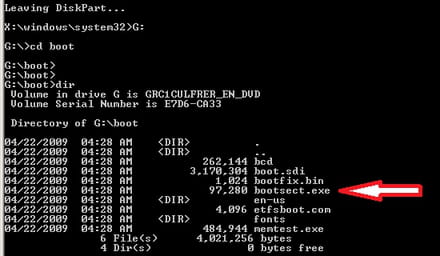 8. To restore the "bootsector code":

NOTE: If this method fails to restore the MBR, you can try the bootrec command as it is also a tool for repairing the MBR.


This will close the command prompt window.
10. Now select Shut Down or Restart 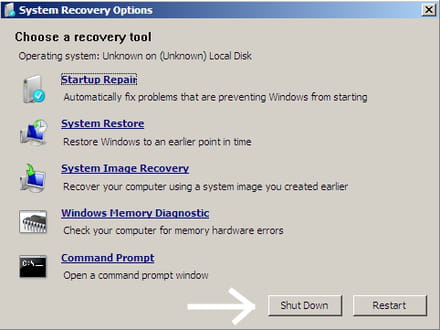 11. Then you can reboot your computer into Windows.

Answer 3 / 4
if the key F11 it self is not working try this:
otherwise:
To access the HP System Recovery, turn on the computer and immediately press the esc key to display the Startup Menu, and then press the F11 key.
You can use HP Backup and Recovery Manager to restore the entire hard disk image to the original factory-shipped state. The Recovery Manager will erase all personal files and information, and then install all the original software programs and hardware drivers. There are two ways to start System Recovery.

Thanks for your answer.

Unfortunately, both ideas you mention fail.

- The machine did used to work with the [f11] key, so that rules out the BIOS idea.
- There is no [f11] option because the machine has no valid MBR, so I cannot access the Recovery manager. I need to "break into" the recovery manager or build/download a Master Boot Record ... or download a cd similar to the "Bypass the MBR" for XP" disk I already have.

Thanks again for your responce.

Brian.
you can read here for solve
https://www.sorbilene.com/forum/Konu-HP-Pavilion-g6-serisi-notebooklarda-recovery-nasil-yapilir.html
Thanks escape-e, but as I have already stated, I have no f11 button functionality. This is because the MBR is corrupted/missing (NB - I have cloned the partitions onto a new hard drive).

Unfortunately, I have been unable to continue with this for a short time due to a crisis at home, but I will post what happens hopefully this weekend after following MaxStart directions in note 5 (and if that doesnt work) note 8.


I want you to go through these steps
install windows 8.1 from a DVD the regular way even if you have to install a trial version of win 8.
follow This How-To to design you HDD as the original one, and enable your original recovery partition.
you may have to copy your saved original recovery partition to your new HDD as I understand that you did install a new one.
after that just boot from your original partition and restore your machine to it's factory status
Damn it !!!, is it ever gonna be the way I want it to be?

I finally got to doing the bits you suggested above. Unfortunately the first one didnt work, and the second one failed only because "Boot.ini is located in a hidden boot partition and cannot be laoded for user editing by EasyBCD"

However it did give me food for thought...

The story so far with this approach is

1 - I deleted all partitoins fron an old hard drive.
2 - I partitioned the drive into 2 halves
3 - I installed Windows 7 into the first partition.
4 - I copied the recovery partition from the original drive over to the empty space on the "Work In Progress" drive.

So with the last idea you gave me I am now in the process of researching how to get the BootLoader to point to the Recovery partition. I have managed to add n entry (copied the old one) to the boot loader so I now have a choice of two Windows 7 installations to boot from. I know they both point to the same installation, but the idea is to point the second option to the recovery partition - perhaps by using BCDEdit in a command prompt environment. I just need to research how that is achieved now - I hope!

I will post back how I get on, but if you have any other ideas or know how this is done then dont be afraid to let me know.

I think we are on the right lines now though

Thanks for your continued help. :^)

Brian
Well the first attempt half succeeded. I was able to change the bootloader to point to the .wim file with the following comands in a command prompt (while running it as an administrator)

It got to the Repair page like you would expect from a DVD installation where it tries to repair your startup (which failed) and then gave the options for Startup repair, System Restore, System image recovery, Windows Memory Diagnostics, and Command Prompt.

I fear this installation might be dead, I will look round the original drive to see if there are any other image files, but I fear its a lost cause now. I will let you know the outcome in a while...
don't forget that the .wim file should let you boot from your recovery partition, but as a way of re-installing windows from that particular partition.
so unless there's another .wim file that loads a special OEM recovery option, the only thing left is to reinstall windows from the recovery partition, which hopefully embedded with your win product key.
Rats!

This is far more complex than I was expecting. It seems the recovery partition is not all that is needed. Booting to a .wim file makes it think you need to restore or repair an already installed installation. I am going to have to find another way of extracting the files I need. I thought what I had learned in my Windows 7 exam was enough - but sadly Windows 8 is different. I need to relearn about installing from a .wim for Windows 8. This might take some time, and not be an economic use of my time, but I'm a sucker for problem solving.

Max, Thanks for the warning, but I dont mind about installing from the recovery partition - hopefully then I can get the machine to prompt me to burn off the recovery DVDs ... but I doubt that as well! As long as it doesnt overwrite the Recovery partition (but at least I have the original drive locked away).

Now where did I put my windows 8 books???
Join the community!