According to new research conducted by the California Institute of Technology in Pasadena the Internet undersea cables not only can transmit data around the world but also prevent earthquakes, tsunamis and save lives. Last year one of Google’s fiber-optic cables connecting Los Angeles with Valparaíso detected around 20 earthquakes of different magnitudes thanks to distortions on light pulses. This led to revolutionary research published in Science lately. Read on to find out how the undersea internet cables can help to prevent natural disasters. 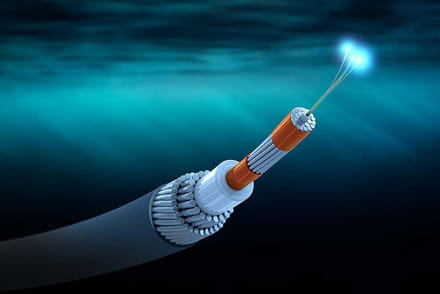 How Do Undersea Cables Detect Earthquake?

Over a million kilometers of fiber optic cable lies at the bottom of the world’s oceans. They were installed at the beginning of the 1980s to connect the whole world via telecommunications and the global Internet. Scientists have been looking for the decision on how to make these cables serve as deep-sea seismicity detectors too because it is extremely difficult and expensive to cover the whole world by seismometers underwater.

Luckily, this year the decision has been found: the assistant professor of geophysics at Caltech Zhongwen Zhan (PhD’13) with his colleagues came up with a brilliant idea:

"Can we find a less expensive way to cover the ocean with geophysical sensors? There’s already this telecommunication cable infrastructure out there. If you can turn them into sensors, that’s wonderful — and that’s what we’re doing now.”,– said Zhongwen Zhan in the latest issue of the Science journal (the issue of February 26, 2021).

The scientists found a way to analyze the light traveling through “lit” fibers, existing underwater cables, causing distortions in communications to detect ocean waves and earthquakes without any seismometers or additional equipment:

"This new technique can really convert the majority of submarine cables into geophysical sensors that are thousands of kilometers long to detect earthquakes and possibly tsunamis in the future. We believe this is the first solution for monitoring seismicity on the ocean floor that could feasibly be implemented around the world. It could complement the existing network of ground-based seismometers and tsunami-monitoring buoys to make the detection of submarine earthquakes and tsunamis much faster in many cases,"– said Zhongwen Zhan in the same research published in Science.

Google vs Earthquakes and Tsunamis

During the research project, Zhan’s team documented around 20 medium to large earthquakes using Google 10,500-kilometer-long cable that runs from Los Angeles to Valparaíso. The cable could notice swells in the ocean caused by storms, so the method can be useful to detect not only earthquakes but also tsunamis that are often triggered by earthquakes.

According to this research soon it will be possible to send early alerts to people onshore that a tsunami or an earthquake is coming. At the same time, it will give seismologists and geophysicists a better idea and understanding of earthquakes happening under the water.

Related
This document, titled « How Can Tech Companies Prevent Natural Disasters », is available under the Creative Commons license. Any copy, reuse, or modification of the content should be sufficiently credited to CCM (ccm.net).
Previous

The History of Memes

Les Horribles Cernettes: The First Cover Art on the Web
The History of Memes