Whether it is used for teaching purposes or Web and Internet development, Python is one of the best programming languages.

What is Python? Python is an open-source coding language that was created by Guido van Rossum who started working on it back in 1989. Today, van Rossum is considered as one of the most influential programmers and Python is one of the most widely used programming languages. In this article, we discuss some of the language’s key features, as well as some additional information. This is the Python download for Windows. 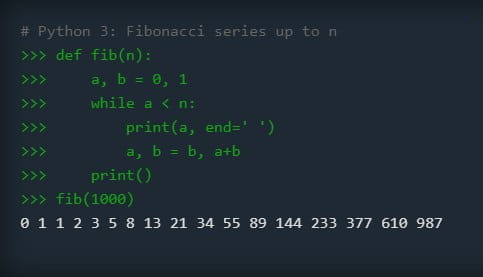 Here are some of Python’s key features:

What is Python used for?

Using the Python programming language requires some advanced knowledge in computing. It has different applications, such as Web and Internet development, scientific and numeric computing, teaching, and software development, among others. To help users, Guido van Rossum has created The Python Tutorial.

It seems that the app has no history of security or safety issues. As always, we recommend reading the official Privacy policy before installing. In general, Python seems as safe as any other programming language (or even safer).

Please note that Python can be used to create a vulnerability.

Python is open-source and you can download and use it for free.

The linked version requires Windows 64-bit. You can also download it for Windows 32-bit, as well as for Mac 64-bit (macOS 10.9 and later).
Images: Python Official