FIFA 22 is the most recent effort of Electronic Arts in trying to create the best football game on the market, and it promises a lot of gameplay improvements, as well as some never-before-seen game modes. Bigger, bolder, better? 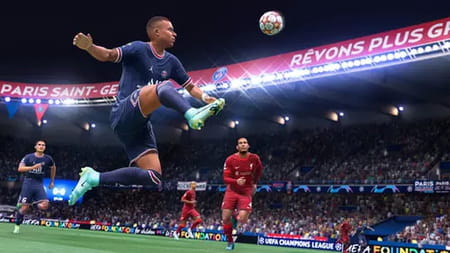 As mentioned above, FIFA 22 boasts a new graphic technology called HyperMotion, bringing more fluid and dynamic animations to the game. Moreover, the players' emotions are shown more explicitly, with dialogues between them.

The PC version of FIFA 22 has been rated 73/100 on Metacritic. The game has received mixed reviews from both professional critics and users. According to many, FIFA 22 does not feel like a major upgrade over previous installments in the footie series.

"Not a great year and a PC downgrade: FIFA 22 still plays well, but its PC version is graphically limited and offers little innovation." (GameStar)

FIFA 22 has been classified with the PEGI 3 label, so it can be considered suitable for all audiences.

Contents Gameplay Graphics and sound Game modes Reviews Age rating Gameplay HyperMotion technology : This is EA's big bet for FIFA 22. The movements of many real-life players were captured to ensure greater realism in...