A network card may have several types of connectors, with the most common being an RJ45 connector and a BNC connector (coaxial cable). In this article, we talk about the RJ45 ethernet crossover cable, as it is the most widely used. The cables used are called twisted pairs, as they are made up of four pairs of wires braided together. Each pair of wires is made up of a solid-colored wire and a wire marked with stripes of that same color. It is highly recommended to use a category 5 cable between 3 and 90 metres long. 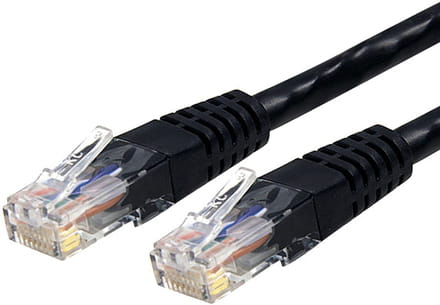 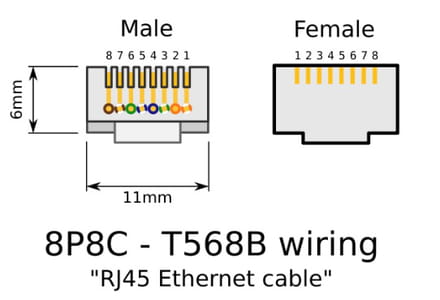 Why Use a Patch Cable

RJ45 is normally used to connect computers by way of a hub (a distribution box into which the RJ45 cables coming from the local area network computers are connected) or a switch.

When a computer is connected into a hub or switch, the cable used is called a patch cable, which means that a wire linked to plug 1 on one end is linked to plug 1 on the other end. The standard generally used for making patch cables is >TIA/EIA T568A. However, there are also TIA/EIA T568B patch cables (the only difference is the colors of some of the wires, which does not affect the proper functioning of the connection, as long as the wires are joined the same way).

Why Use a Crossover Cable

A hub is very useful for connecting many computers, and overall is faster than a coaxial cable connection. Nevertheless, to connect two machines to one another, there is a way to avoid having to use a hub.

It involves using a crossover cable (also called a cross cable), which has two wires that cross over one another. The recommended standard for this type of cable is TIA/EIA T568A for one of the ends, and TIA/EIA T568B for the other. This kind of cable can, of course, be purchased, but it is very easy to make on one's own.

To make an RJ45 cable, buy a patch cable, split it in the middle, and then reconnect the wires using the following RJ45 color code:

Related
This document, titled « Creating an RJ45 crossover cable », is available under the Creative Commons license. Any copy, reuse, or modification of the content should be sufficiently credited to CCM (ccm.net).
Previous