An offline dictionary loaded with millions of words from 25 languages.

With the multicultural world, we are living now, owning a dictionary is more than necessary. Simple Dictionary Applications is one of those translation tools allowing users to use free bilingual online dictionaries.

Simple Dictionary Applications is different from other software thanks to its ability to create hundreds of free bilingual dictionaries that users can download from the Universal dictionary system. Concerning the dictionary, since downloading freely dictionaries from the Universal dictionary is possible, users can profit from 25 different languages. They include Basque, Bulgarian, Lithuanian, Czech, Danish, Dutch, Esperanto, Finnish, French, German, Greek, Hungarian, Italian, Japanese, Rumanian, Norwegian, Polish, Portuguese, Russian, Slovak, Slovenian, Spanish, Swedish and Turkish. Apart from being a dictionary, Simple Dictionary Applications is also a tool for translating the full text from a given language into another one. There is a search box if you want to seek for special words or expressions. 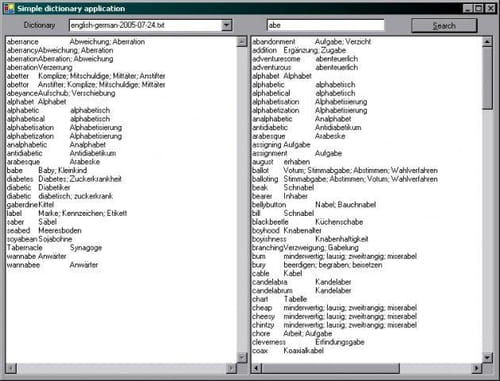