Candy Blast Mania
Download
Download Freeware
iPhone - English
Candy Blast Mania is a Match-3 puzzle game both developed and published by TeamLava. The gamer has to match and collect candies. Meanwhile, the Gummy Bear King and his cronies are plotting to ruin Candy Kingdom. The goal is to stop them and save Candy kingdom by matching and collecting candies. It is only available in English. 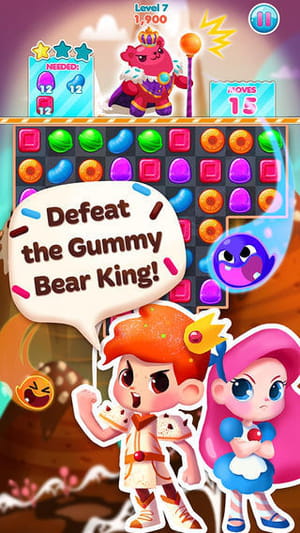 Candy Blast Mania gathers over 100 levels of difficulty that players can profit from. They can stock up on Lemon Drops and Jelly Beans. For each completed level, they are upgraded to another one that is trickier than the previous. It is possible to find big matches to create Sweet Spots to gain big bonuses. The app offers two Boosts that are accessible for free. They are Candy Wand and Candy Scoop which are primarily used to clear obstacles and recharge. These Boosts can quickly upgrade a player to another level. Candy Blast Mania is endowed with a Facebook icon that directly links to the social network. The gamer can compete with other friends on this social network for the top score in every level proposed by the app. Updating Candy Blast Mania can be done for free. This means that new levels, obstacles, candies and other improvements are accessible free of charge thanks to this free update.

Some in-app items are paying but the option can be deleted.