Your iPhone may find this game very heavy.

Disclaimer: this is the latest version of NBA 2K14 to exist. If the game no longer runs on your iPhone and you want to discover more recent games from the same publisher, you may want to consider purchasing NBA 2K20.

NBA 2K14 is a basketball video game that is available on several platforms. This version is conceived for iOS. The game is published by 2K Sports and developed by Visual Concepts. They agreed to let LeBron James of the Miami Heat to 1be the cover athlete. This app was first released on October 2013. It is both a single-player and multiplayer game. 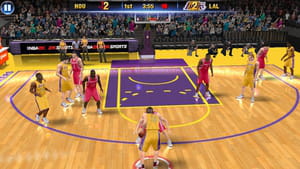 NBA 2K14 players have to go on Controller Setup for help to see and master all commands that are crucial for winning a game session. For instance, to perform sprint, players have to tap on RT and Y for a rebound. It is up to the gamer to choose their favorite basketball team.

NBA 2K14 is packed with over 50 hours of sports commentary that are played back with soundtracks. Player can enjoy the listening to famous play-by-play announcers such as Kevin Harlan, Steve Kerr and Clark Kellogg.

This app can be downloaded and used for free.