Although this is a fun game, the marketing around it is known for using false advertising.

Gardenscapes is a puzzle video game. It was released in 2016 and was developed by PlayrixThe game has over 10 million downloads on Android but it is also available for iPhone and iPad. The gameplay of Gardenscapes is a combination of tile-matching and simulation elements. This is our Gardenscapes download page. 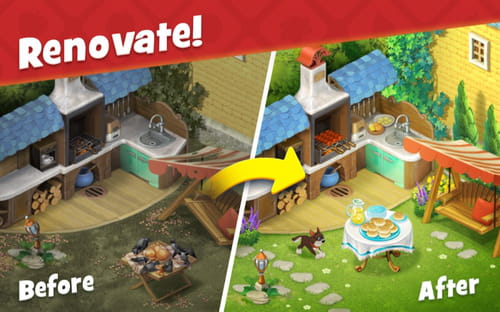 The aim of the Gardenscapes game is to solve match-3 puzzles in order to restore a derelict garden. Some of the key features include:

Any Cheats for Gardenscapes?

There are certain Gardenscapes cheats available that can give you things such as unlimited stars and life, as well as extra boosters, etc. If you search well enough on Google, you will probably also come across a Gardenscapes hack version, which is a modified copy of the game with built-in cheats and other advantages not available in the official release.

How Many Levels in Gardenscapes?

Where to Play Gardenscapes Online?

If you are not keen on installing the Gardenscapes app on your smartphone, you can play Gardenscapes online through Facebook.

You can download and play this game for free. However, it includes some in-app purchases

The Gardenscapes game has been criticized for using false advertising and promoting misleading gameplay elements that do not represent the reality of the game.

The most famous Gardenscapes alternative is Homescapes, which is also developed by Playrix. Other games similar to Gardenscapes include Candy Crush, Fishdom and Township.