TLauncher is a very easy-to-use Minecraft Launcher. It is handy to have all the Minecraft versions in one place, and the devs are constantly updating the software. 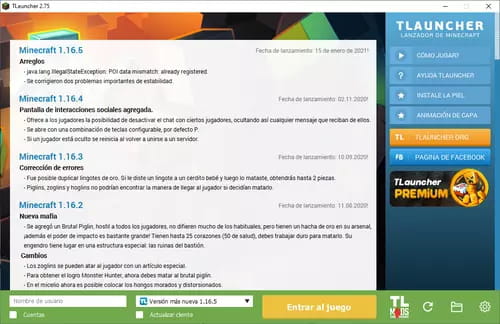 TLauncher is one of the most popular Minecraft launchers, which includes lots of innovative features:

How does TLauncher work?

To use TLauncher, you simply have to download the launcher we provide you and run it. Once installed, you only have to enter your nickname and the Minecraft version you want to install. If you have any doubts about starting using TLauncher, you can consult the official guide on its website.

TLauncher is a completely free launcher that allows you to install Minecraft on your PC in a few clicks. It also has a Premium version that gives you access to some privileges: an increased download speed using the game's extensions and mods, technical support, and the possibility of removing ads.

TLauncher is not licensed by Mojang, so it is not an official Minecraft launcher. However, it is one of many users' most popular Minecraft launchers. Even though the software contains no viruses, it is always recommended to install anti-malware software.

Your computer must meet the requirements of Minecraft:

TLauncher is also available for Mac and Linux.