Conspiracy theories grow like weeds and it is important not to believe everything you read or hear. One of the sources from which multiple conspiracy theories have originated in recent months is QAnon, whose epicenter is located in the United States. It feeds the conspiracies of thousands of people on five continents and we will explain its origin below whilst giving you some tips to avoid falling into its trap. 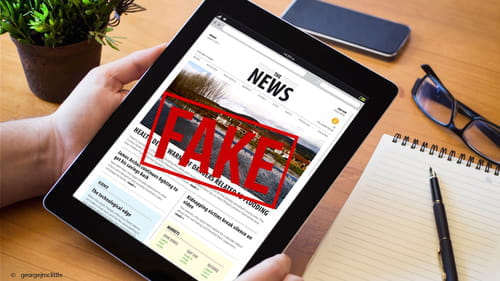 QAnon is a conspiracy theory that has spread through social networks around the world, but it started in the United States. The amalgamation of unfounded and unconnected ideas has grown due to fear and uncertainty in the midst of the Covid-19 pandemic. This in turn has given rise to a movement of people who think that the world is controlled by a secret society made up of Hollywood movie celebrities, pedophile billionaires, and U.S. Democrat politicians.

Without any proof and using fictitious ideas that serve to create a narrative that fits the fantasy world of its followers, QAnon promoters claim that President Trump is secretly fighting to destroy these so-called evil Hollywood and American jet-setters and send them to Guantanamo prison. Although it’s hard to believe, there are many who do believe this whole story without needing a shred of proof, whether out of fear, uncertainty, loneliness or ignorance.

The Origin of QAnon

In 2016, when Donald Trump and Hillary Clinton were facing each other in the race for the American Presidency, the great conspiracy theory Pizzagate emerged. Basically, this hoax was promoted worldwide by large media outlets linked to the extreme right in the US. The Pizzagate conspiracy claimed that emails leaked from Hillary Clinton's team revealed secret codes to access a child trafficking and pedophilia network through secret locations, starting with a pizzeria in Washington.

It might seem just a bit ridiculous and harmless, except for the fact that many people truly believed this dark network existed and a man even went to the pizzeria in question in Washington and opened fire inside, believing that children were kidnapped there. Of course, all of these beliefs about Pizzagate were and still are false.

QAnon emerged out of Pizzagate. It is the updated and expanded version of that conspiracy, with some identical elements (secret pedophile organizations with celebrities at the helm, drugs made from adrenochromes obtained from children, etc.), and with some novelties, such as a marked anti-Semitic character. It all started in October 2017 on the 4chan digital forum when a user named 'Q' started posting a series of fake, anonymous messages claiming that Hillary Clinton was going to be arrested. Hence the origin of the name for this compilation of lies: Q, after the user who initiated it, and Anon, short for 'anonymous'. This conspiracy continued to gain traction after more than 4,000 publications on 4chan and later on 8chan and 8kun, about supposedly highly confidential secrets. Thousands of anonymous people feed this false story, saying that they have to work to get evidence that they surprisingly (or not!) never get.

Followers of QAnon and other conspiracy theories are used to announcing unfounded omens. To them it doesn’t matter: people determined to believe in something are capable of lying to themselves and others to the bitter end. Often these people will adapt their ridiculous stories citing secret forces as the reason why their predictions and prophecies haven’t come to be.

On the other hand, QAnon fans say they continue to research and propagate "the truth" (always without proof, of course). To successfully spread the lies, they often use highly emotional arguments and fallacies. In this case, the specialty is children. The network is full of messages from QAnon fans and hashtags in the style of #SaveOurChildren.

The exact origin and motivation behind QAnon is not yet known, but it’s proven that it has fooled thousands of people around the planet into believing multiple falsehoods. For example, some Facebook groups that are focused on spreading the lies of QAnon have more than 100,000 followers.

We must however relativize and avoid scaremongering: QAnon has many followers on the planet, as well as all kinds of ramifications (religious, sexual...), but many of them realize sooner or later that everything is a hoax. Furthermore, a recent Pew Research Center survey concluded that 7 out of 10 Americans have not even heard of this conspiracy. Fortunately, some social networks are fighting the spread of hoaxes and Twitter has already restricted more than 15,000 accounts dedicated to spreading falsehoods linked to QAnon (although Facebook, the largest social network in 2020, is still not doing anything to combat this hoax). There are also platforms such as Poynter, that fight against online misinformation and conspiracy theories like QAnon.

This document, titled « What is QAnon, The Mysterious Conspiracy Theory? », is available under the Creative Commons license. Any copy, reuse, or modification of the content should be sufficiently credited to CCM (ccm.net).
Previous

The Best Video Effects on Funimate!

What Is Amazon Music HD

The Best Video Effects on Funimate!
What Is Amazon Music HD