The transmission medium is the physical vehicle that facilitates the transport of information. Guided transmission media are those which use a solid medium (cable) for transmission. There are many types of cables, but the most common are: Coaxial cable, Double twisted pair and Optical fibre. In this article we’ll provide an introduction to each of them. 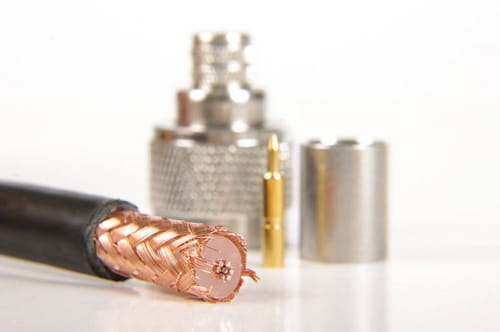 Coaxial cable has long been the preferred form of cabling, for the simple reason that it’s cheap and easily handled (weight, flexibility, ...).

A coaxial cable is made of up a central copper wire (called core) surrounded by an insulator and a braided metal shield.

The following image shows its structure:

Coaxial cable can be used over long distances at high speed (unlike twisted pair cable), however it is usually used for basic installations.

It is part of the RG-58 family whose impedance (resistance) is 50 ohms. The different types of thin coaxial cables are differentiated by the central part of the cable (core).

Transceiver: the connection between Thinnet and Thicknet

Thinnet and Thicknet are connected using a transceiver. It is equipped with a so-called "vampire" plug that makes the real physical connection to the central part of the Thinnet by piercing the insulating envelope. The transceiver cable (drop cable) connects to an AUI (Attachment Unit Interface) connector, also called a DIX (Digital Intel Xerox) connector or a DB 15 (SUB-D 15) connector.

Thinnet and Thicknet both use BNC (Bayonet-Neill-Concelman or British Naval Connector) connectors to hook up the cables to computers.

The following connectors are in the BNC family:

In its simplest form, twisted-pair cable consists of two copper strands woven into a braid and covered with insulation.

A cable is often made of several twisted pairs grouped together inside a protective jacket. The twisting eliminates noise (electrical interference) due to adjacent pairs or other sources (motors, relays, transformers).

Twisted pair is therefore suitable for a local network with few nodes, a limited budget and simple connectivity. However, over long distances at high data rates it does not guarantee data integrity (i.e. loss-less data transmission).

UTP cable complies with the 10BaseT specification. This is the most commonly used twisted pair type and the most widely used on local networks. Here are some of its characteristics: 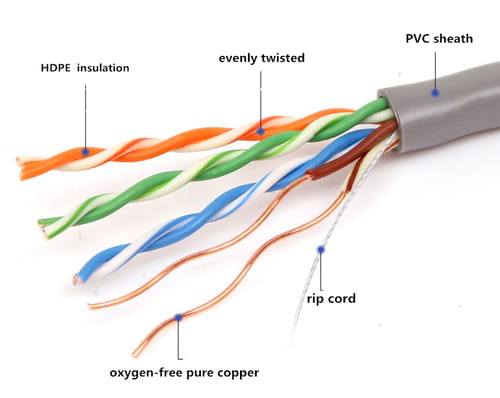 Most telephone installations use UTP cable. Many buildings are pre-wired for this type of installation (often in sufficient numbers to satisfy future requirements). If the pre-installed twisted pair is of good quality, it can be used to transfer data in a computer network.

UTP's major problem is that it is particularly susceptible to interference (signals from one line mixing with those of another line). The only solution to this is shielding.

STP (Shielded Twisted Pair) cable uses a copper jacket that is of better quality and more protective that the jacket used for UTP cable. It contains a protective envelope between the pairs and around the pairs. In an STP cable, the copper wires of one pair are themselves twisted, which provides STP cable with excellent shielding (in other words, better protection against interference). It also allows faster transmission over a longer distance.

Twisted pair cable is connected using an RJ-45 connector. This connector is similar to the RJ-11 used in telephony, but differs on a few points: RJ-45 is slightly larger and cannot be inserted into an RJ-11 jack. In addition, the RJ-45 has eight pins while the RJ-11 has no more than six, usually four.

Optical fibre is a cable with numerous advantages: 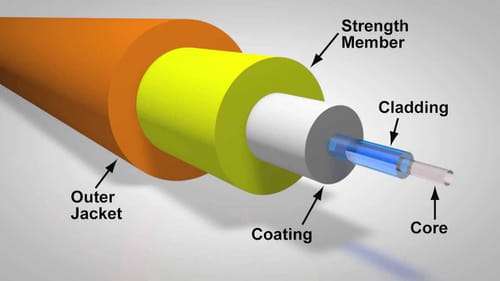 Fibre optic cabling is particularly suited to links between distributors (central link between several buildings, known as backbone) as it allows connections over long distances (from several kilometres to 60 km in the case of single-mode fibre) without requiring earthing. Furthermore, this type of cable is very secure as it is extremely difficult to tap in to such a cable.

Related
This document, titled « Data transmission - Cabling », is available under the Creative Commons license. Any copy, reuse, or modification of the content should be sufficiently credited to CCM (ccm.net).
Previous

What is artificial intelligence?