Code :: Blocks is a software specially designed for programming. It has an integrated development environment in C and C + +. It offers a variety of tools for development and a good programming knowledge is somehow required. 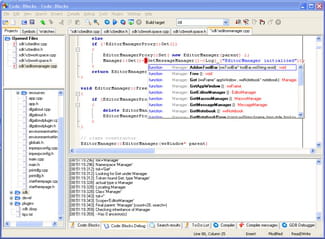 It is entirely a free GPLv3 with no hidden costs. It is possible to use it on any platform using wxWidgets. As it is written entirely in C++, there is no need to use language interpretation or load a bookstore owner. It can increase its potential by adding plug-ins. Code :: Blocks can be downloaded with the integrated compiler, MinGW (Win32 version of GCC). It also supports multiple compilers, including MSVC++, Digital Mars, Borland C++5.5 and more. Compilation operations can be done very quickly. If you have a powerful processor, it can process to batch compilation. It provides a GNU GDB interface for debugging. To avoid errors when writing a program, it has a system that displays symbols and arguments. Code :: Blocks allows you to customize the dump. Code :: Blocks provides a visual environment for rapid creation of programs with graphical interfaces, WxSmith which is running on Linux, Mac OS X and Windows, and can be used after installing the free and multiplatform library wxWidgets.

Code::Blocks Studio is an Open Source, that is, free of charge.