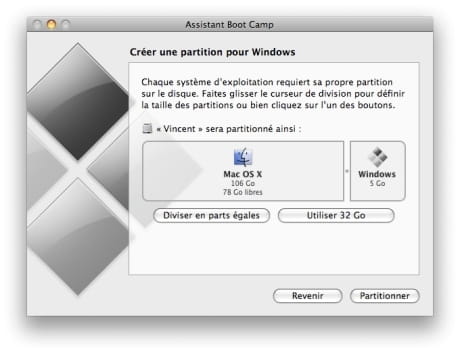 Disks manager: in order to make it possible to install the double operating systems, a disk management tool is provided by Boot Camp for Windows 7. It takes over all necessary elements including drivers so as they are recognized by both systems.

Selecting the operating system: this action can be performed easily once Boot Camp for Windows 7 has been installed. Indeed, the user is invited to choose either to load the Mac system or the Windows one at the computer start up.

Settings: there are various settings the user is free to customize according to his preferences. For example, he is allowed to set which OS will be the default one and which disk partition to be loaded automatically at the computer start up.

The use of Boot Camp for Windows 7 does not impact on the computer's performance.
The installation and the execution of this application are easy and pass by few simple steps.

This program is compatible only with Mac computers that use Intel processors.