Tumblr offers a great place for inspiration. However, you should keep in mind that it contains some sensitive content.

The Tumblr app is the mobile app for the infamous microblogging and social networking website of the same name. It was developed by Tumblr, Inc. and designed for Android and Apple devices. Its aim is to encourage creativity and users can reblog images and text posts, or create their own. The app has over one hundred million installs on Android alone and in this article, we discuss some of the app’s key features, as well as some additional information. 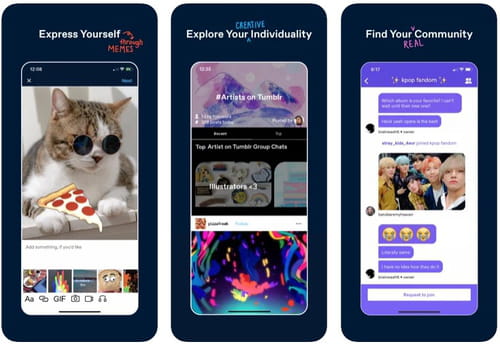 Here are some of the Tumblr app’s main features:

How Does Tumblr Work?

The Tumblr app is fairly easy to use. Once you download and install it, you will get to create your account and manage your blog appearances. You have a home page, an explore button, a message and account traffic button, as well as an account button that will allow you to view your profile, your favorites, and the blogs you follow.

You can find many tutorials online on how to start your Tumblr experience.

Is Tumblr Secure and Safe?

It seems that the app has no history of security issues or abusive data collecting. As always, we recommend reading the official [Privacy policy] in order to take note of the way Tumblr uses your data. You should also know that Tumblr URL-sharing post template, which means that users can link to any site they want to a post.

When it comes to safety, the platform is known for containing some mature content and it is not suitable for children and adolescents under 17 years of age.

You can download and use this app for free.

In order to run the Tumblr app on your device, you need Android 6.0 and up or, for the Apple version, iOS or iPadOS 13.0 and later. The app is compatible with iPhone, iPod Touch, and iPad.
Images: Apple store