My Talking Angela for Android

My Talking Angela seems to be cool if you like little cats who want to share with you their day-to-day activities, it reminds me of Tamagotchis.

My Talking Angela is a mobile video game developed and published by Outfit7 Limited in 2014. In this game, you have to take care of a cat named Angela which reacts to the player’s actions. The game is very popular as it has been downloaded more than 10 million times. You can download the My Talking Angela app for Android here. 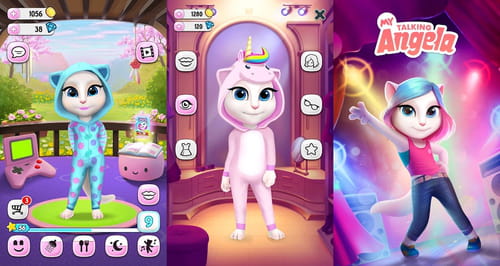 Is My Talking Angela free?

My Talking Angela is free. The game also contains ads and in-app purchases such as monthly subscriptions, take care to cancel them manually as they automatically renew every month.

The game is rated usable for everyone.

Is My Talking Angela safe

Even though the game is rated PEGI+3 you may have some doubts about the data collection due to the fact the user talk to the application which record and answer according to. According to their privacy policy, ‘This app is PRIVO certified. The PRIVO safe harbor seal indicates Outfit7 Limited has established COPPA compliant privacy practices to protect your child’s personal information. Our apps do not allow younger children to share their information.’

You could try the My Talking Tom 2, or my talking angela 2

My Talking Angela is also available on iOS.