Download Wireshark (EN)
Wireshark is a packet sniffer, it means that it is a tool programmed to detect the circulating packet on the network. It analyses this latter in a transparent manner. 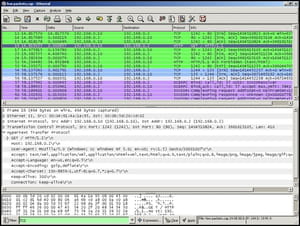 Analyzing: the main feature of Wireshark is to analyze and to detect if there is symptoms of network problems. For instance, blocked connection or refused connection, slow application response times as well as content redirection.

Customization: with Wireshark, it is possible for the user to show and hide the toolbar. Many features are also available to customize the interface. To activate them, he only has to adjust the appropriate option at the menu bar.

Virus detection: sometimes, the software works like an antivirus. Indeed, with Wireshark, it is also possible to identify the network hosts that may contain the malicious packets such as Virus or Malware. It is able to block them.